I had cause to take issue with C&RT the day after I left Percy back 'safe' on her moorings. My good fellow moorers were in touch to tell me C&RT had been and strimmed the grass all over my new paintwork. Those who have been with me for some time will recall on two separate occasions jut after I had Waterlily repainted the contractors broke windows on my boat strimming against it.

And they did it again here

After the second event I met the contracts manager and despite some suggestions the only way I could guarantee no further damage was to sign a vegetation cutting exemption form or the like. BW paid for the windows but not my time  - I was generous in seeing it as a reason to cruise back to Willington to have the windows taken out and driven over the Wesley windows for replacement.

You could not have made it up less than 24 hours after I bring my undamaged newly painted boat back despite a good deal of lack of veg maintenance to the waterways C&RT did this .... click on the images... 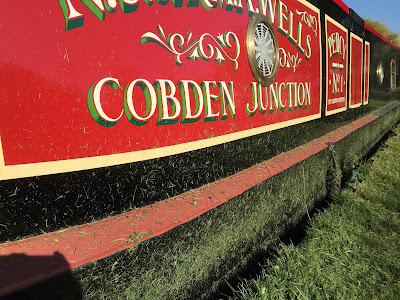 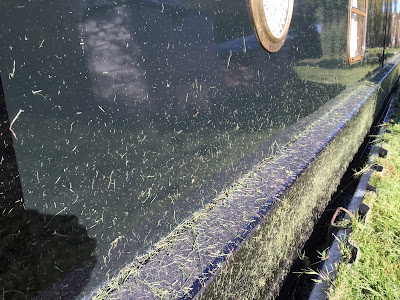 I am aware that over time I will add some wear marks to my boat, but it should be safe on a mooring I pay C&RT well over £1500 per year for and I do my own mowing, not strimming. Until they vandalised my boat. The operative would have delighted I am sure in making such a mess of someones pride and joy.

I wrote to Cart and got a reply last Monday from Sandie Dunstan advising she had passed my complaint to the contracts manager....... then nothing, not even a holding email to say he/she was dealing with it. I held back to give C&RT the chance to respond to my claims, but no reply over  a week is not good enough  - I pay well over £2,300 just to have my boat bobbing against their armco, I mow my grass and have lodged the required form to tell them not to do the work, what else could I do?

I will forward on this blog post to the moorings manager again and also copy in Richard Parry, just in case he feels it is important to show from the top what customer relations looks like to some of his staff.

Watch this space......C&RT have a right to reply and I will gladly publish it here if they wish.

Update... C&RT have been in touch and advised my complaint is now being managed under their procedures. I received another supportive email from the mooring manager Sandie and a more formal email from Daniel Greenhalgh  - Operational Contracts Manager. He has stated I should have a response within 15 working days.

Pure wanton vandalism if you ask me, thoughtless gits....

I don't like paranoia usually but since they strimmed away from my boat - a non shiny one and yet did this to yours, right next door, you have to wonder...?

I don't like paranoia usually but since they strimmed away from my boat - a non shiny one and yet did this to yours, right next door, you have to wonder...?

That is dreadful Nev I hope you get some satisfaction from CRT. It seems Mandy might be right and a nice newly painted boat is good fun to vandalise for some bod. I would have been fuming!!

Have you considered a move to Kings Bromley Marina, same sort of price, nice pontoon, electric and water if required, toilets and showers. not on line and no stimmers.

Hi, Many times however I did not like Mercia when we stayed there for a couple of months. The thought of putting Percy somewhere safe from C&RT really appeals. However it is so nice on a summer evening to sit and fish and watch the world go by....Plus the poeple down there are a great bunch as I guess they are at kinds Bromley. Another marina I considered would be Great Haywood, great cruising potential... I guess until I know how I will be using Percy going forward I'll stick as I may well be living on board again early next year.