This is our Llangollen cruise. Yesterday we should have been flying out for a two week self sailing Trip around the Greek islands. That’s been deferred until next year now so it’s a bonus two and a bit weeks on the boat with the destination of Llangollen basin.

We were planning on getting away yesterday morning when I did the original CanalPlanAc route but a family meeting today in Walsall saw us arriving at Percy late yesterday, getting the bed made and clothes put away while I was in Eccleshall food shopping.

This morning while Rachel sorted the rest of the stowage I watered up, lubed the engine, changed the auto stern greaser ( it lasts a year and the label I stuck on last change advised Sept 20 for a change and it was ready.) Final job was to sweep the chimney and get my arm up over the back boiler plate to remove the debris. All done then over to Walsall.....

We got back and started the donk untied and were on our way at 5pm with a revised target of Tyrley locks (original first night was at the top of the Adderley flight but that would have meant a lot of night cruising after a long day neither of us fancied.)

It was a lovely evening while the sun was with us 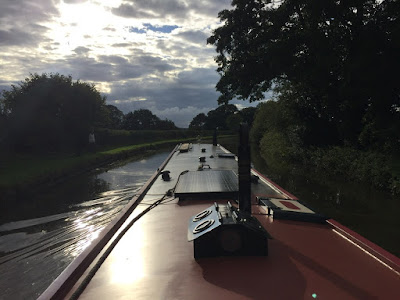 We decided to do the Tyrley flight even though we knew it would see us mooring up in the dark. Got to the third and I could not get the gate past half way open, it was hitting something on the canal bed. Tried multiple times so I asked Rachel to bring the boat forward so I could try a rope and the boat, however the pound was filling back up and the far side bywash pulled Percy onto it ! So it was getting dark, I could not open the top gate and Percy was wedged on the weir ..... tried not to panic and got the boat bole. The canal or rather the water in the pound came to our rescue in two of the issues ..... the water rising in the pound lifted Percy off the weir enough for me to push the stern off. Then the extra water had (I guess) floated the gate just enough over the obstruction for me to open the gate.... but it was getting darker and we were getting to the last two locks that you may know are deep in a cutting so dark. 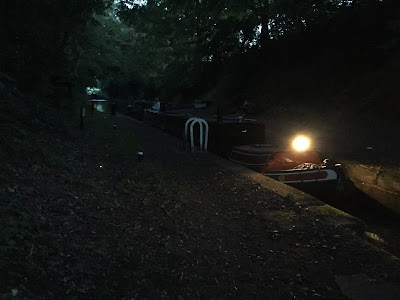 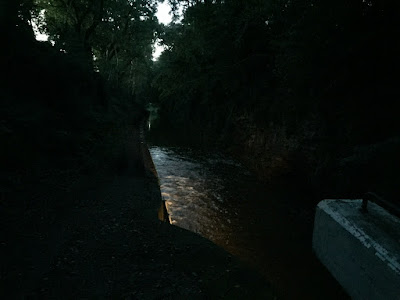 It looks lighter than it was as I needed my head torch to do the mooring up. I. Think that is Venus above Percy - the small dot above and in the middle of the tree ( the other is the light reflection ) 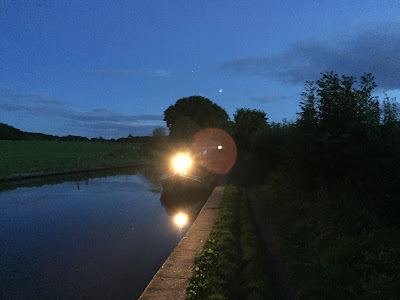 We are behind schedule still and Rachel has a work call to take at 3pm tomorrow plus last time we were in Nantwich the moorings were very full so it’s a 6am alarm call tomorrow to be on the go at 7 ( I prefer early morning cruising over night cruising for sure)
Posted by Nev Wells at 21:25