We (I) planned a 8am arrival at the Grindley brook staircase locks  - I really did not want the same 2 hour wait we had the other day. It worked well and I was able to use the services for rubbish and cassette as we were the first boat there. 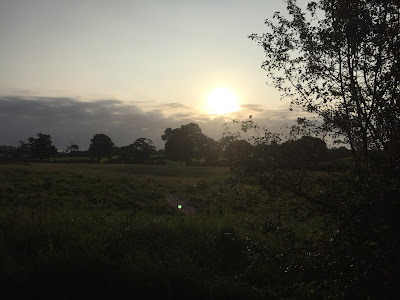 I had a good chat with Charlie the lock keeper. He said yesterday there were 63 passages through the locks with it getting a bit fractious at the bottom made a little more complicated by the Chamberlin pair of working boats coming up. He said he had one irate private boater approach him demanding he go down and ‘ sort it out’ and make the passages quicker !

His observations were there was more agitation and moaning going on this season, mainly from people like me ( he did not say that ) private boaters. My spin is more marina  boaters out at what is normally a quieter time only to fine lots of boats out. He said he had a friend up in one of the hire bases and they were booked out until the end of November. He also said all those bookings cancelled had been remade and people we coming back off their hastily booked canal  holidays that had enjoyed it then booked next year. Good for the canals and businesses  - and C&RT

Our 6 lock decent of the Grindley flight in under an hour was dented by a four boat queue at the next lock, not helped it seems as the lead boat had got caught on the cill. No great drama just a little slow down.

There is a need for some veg management on the lower part of this canal for sure. 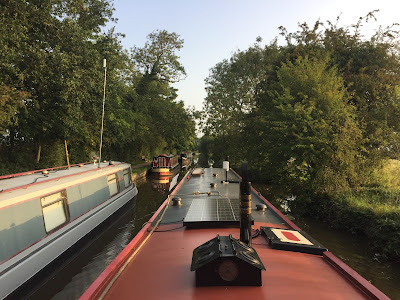 We came round a corner and found a boat blocking the canal. I had to use our boat pole and pole it back and re-tie it up with the bits of rope left  - it had been done a few times judging by the various bits of rope and knots. 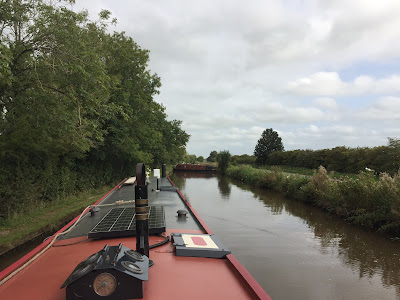 The rest of the trip was just nice boating, still busy and a few hold backs at bridge holes but lovely warm mid September weather. 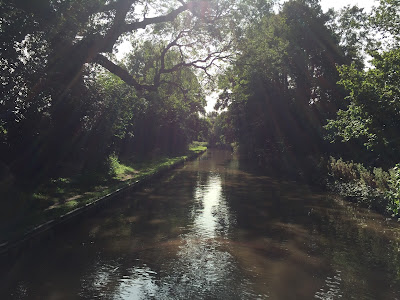 Just short of eight hours cruising today and we are just up from Swanley marina. Plan tomorrow is an early is start to get to the Hurleston locks then into Nantwich by late morning to hopefully get a mooring so we can go into town. Later we may move to a rural mooring for the cat. Then we will be set fair for the Audlem flight on Saturday and hopefully get above Adderley so we can have a lazy Sunday with an evening cruise back to our mooring.
Posted by Nev Wells at 16:37

We'll ("Mintball") probably pass you on Audlem on Saturday, doing much the same trip starting at Drayton.

I hope the traffic won't be too bad, but if there are lots of new people trying canal holidays it can only be a good thing: we need more than those living there and the retired (even if I'll be joining those ranks soon) using and supporting our waterways.

Hi Nick, we will look out for you. I don’t think it’ll be quietening down any time soon, especially as we are having this spell of lovely weather. I agree it’s good to see the canal being used. I said to someone the other day the hirers I am passing today could be the purchasers of my boat in the future... have a good trip.