There is a lot the boat hire companies need to improve on.

They obviously don't give much detail on boating etiquette. Sure there are the speeders when moored up, some come by with a big smile on their face accompanied by an impressive bow wave. But on this canal it's the passing speed and distance that is the issue. Very few hirers slow down when passing and they are maintaining their bow wave speed  (no doubt driven by the need to be somewhere after massively miscalculating distance based on the mythical 4mph)

The passing speed is one thing but the lack of appreciation of the varying depths of the canal along with the passing speed pushed us onto the silty  (no water cause the passing boats sucked it out from under us) edge. Happened four times today, once getting us totally stuck relying on the pole to get us off, other times we reversed off.

We resorted to holding a much of the centre channel as possible and that worked in the main but got a few glares from the (no fault of their own) uneducated boaters.

I sound like a right private boating snob but these are the realties of a vey busy canal with lot of inexperienced crew.

C&RT need to be more active on this canal with of side vegetation maintenance as well as dredging. Some stretches are one boat only .... another seemingly missed briefing to hire boaters - the tow path boat gives way to the non tow path boater.... again we were forced to hold or reverse as happy holiday boaters came around moored boats with no appreciation of where our boat was going to go .... I am of the opinion many bring road manners to the canals..... 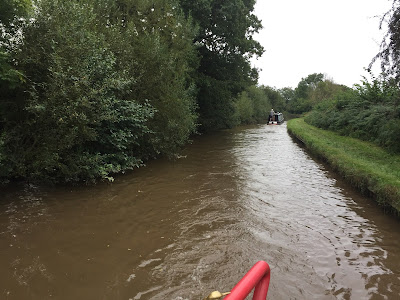 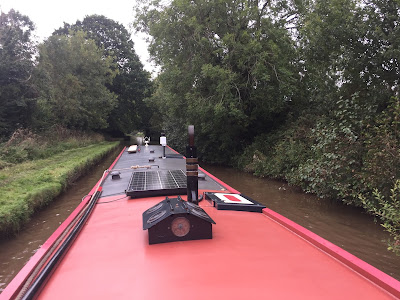 Today we had a leisurely start and took a walk into Ellesmere ( not much compared to Whitchurch) for supplies then set off at 1.40pm and mored up just after Whitchurch in the same mooring outward bound at about 7pm.

Tomorrow we will be up earlyish to try and get to the Grindley Brook staircase locks before too much of a queue forms. We can't afford the hour per lock queues we had up the canal to reappear for the remaining locks on this canal.

Our target is somewhere near Swanley, a good days boating if we get that far that'll give us and easier day Friday ( and maybe a mooring in Nantwich),  a long Saturday doing the Audlem flight and Adderley locks and back to the mooring late Sunday if all goes well.

Nev you need to cruise the canal in winter. You see more (lack of vegetation) and boats are almost nonexistent!

It's really hard to train people to pass properly, especially when deep drafted boats are involved. You're right to hold the channel - unfortunately the hireboats will then probably end up in the mud/trees because they don't know how to pass. Done right, there should be no need to slow down. I wrote about it here with a right grump, but instructions too ... https://chertsey130.blogspot.com/2015/02/not-narrowboat-column.html

We can help you on the Audlem flight on Saturday Nev if you let me know what sort of time you'll be at the start. DM me on FB if you want some help.

I'm only a hire boater, been doing it for 30+ years and have done the RYA course so could get a permit to take the Scouts out and no-one has ever mentioned

It makes sense though as easy for towpath boat to drop crew off and a rope if needed or pole off.

I have found that with some hire boats the tickover is quite high or worse the morse control so badly adjusted that as soon as its in gear the revs rise.
Worst of the lot was one hire boat that was so poorly designed that at tickover you had almost zero steerage.

We hire a boat every few years and did so mid July. Maybe things have changed since then, but all security rules around "the situation" made that the normal training was reduced to watching 2 hours of DVD. I can imagine most people don't pay attention.
And I fear that also the half an hour assistance for first time boaters was suspended. And thus we high speeds and low speeds.
The "tow path" side rule is new for me, never read about it and it's not on any book or DVD from CRT. (Or I must have been asleep at that time). But on the other hand it's so logical that we applied it a number of times.
About timing: every time we pick up a boat, we're asked if we have a guide book for that trip. This implying that many people don't and so never really planned the trip.

Hi Frank, i can understand the briefings being changed, Re the towpath boat giving way you’ve got me wondering where it was I picked it up but it is common sense. There are some good online maps now that maybe the hire companies should subscribe to ( waterway routes?) and the hirers get access a week before for planning and during their holiday?

Hi Dave, Not ‘only a hirer, you are more qualified than most ( including me) in years and courses. We’ve not hired for many years so no idea how the boats are set up, but some seem to have warp drive !

Hi Sarah, I’ll have a read .... when are we going to see you out and about on Chertsey ?

Hi Tom, we’ve done many winter cruises and have been iced in before. I agree its a great time to cruise and we have a back stove on Percy. (Or will have again) when we get the little GWR stove replaced with a safer offer.... nothing better than cruising along with the back doors shut and the stove by your left leg with all the heat coming up through the hatch. Lovely