... well it is for my internet. When you spend time on a boat or live on a boat or as is the case for us rely on 4g broadband at home  because the copper internet is so poor (around 1mb/sec download is poor.) you 'manage your internet consumption.

There are many good YouTube videos on how to get broadband on your boat. My son(s) have fast unlimited broadband - well over 100mb/s and with it being unlimited it does not matter what is connected and what is syncing . In fact the digital world of today just assumed everyone has unlimited Broadband so allows their software to be update or syncing pictures or documents downloading updates without asking etc.

So why danger time. We were due on the boat this weekend but the crap weather forecast put this back for a week so we have been sorting and dumping and shredding and sorting 'stuff' at the cottage. We are on the last room if you don't count the workshop  - our office and it is full of stuff. I have now got my windows PC up and running but is has not been on since January - queue many many updates of operating systems and software - all raiding my generous but limited data amounts.

So here is my tip - I've posted it elsewhere. I have a LG phone that a very good friend gave me for one simple reason - the telecoms company 's software is blind to its use, meaning I can tether to it and my 30gb tether allowance is not touched. So before I fired up the windows PC I enabled the tether on the LG phone and lots is going on in the background but all not eating one of my three (yes three) internet data sources.

It may not last but it is very useful right now. When I was living aboard it was used a lot and was very effective. I can provide the model but I guess it'll also be some specific update (or not update) that has allowed it to be invisible .
Posted by Nev Wells at 14:09 No comments:

Evening cruising, tappets and all change at Fradley

Unlike some we don't have set cruising times. Some are moored up into the holes left by other boaters by 11 am having run for 2-3 hours, got hot water and charged their batteries. This is the optimum cruising for best moorings and best charging regime - possibly.

We actually went out for a cruise. The bottom of the boat no longer is covered in weed growth !

I got to the boat Tuesday to help my neighbour in her relocation to a very rural mooring some distance away from Fradley. Like us she has seen Fradley develop into quite a tourist attraction. A new marina is being dug out just below common lock and Fradley village is seeing another explosion of housing and it is eating away the gap between Fradley junction and the village. A long time before they connect, but they will. It does generate more traffic and footfall for the junctions pub and cafe(s) as well as tow path walking. All as to be expected but it is not the Fradley we originally came to over 11 years ago now.

So a car shuffle that took most of the day as I was not overnighting as the boat was cobweb and dust city....

Last couple of photos of my lovely boaty neighbour. I think Mandy, Bonny and Don't panic will be missed on and around the Fradley Junction moorings. 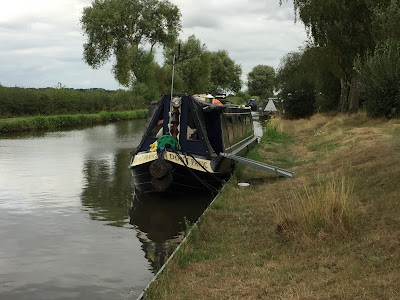 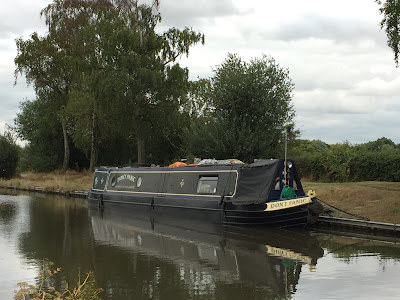 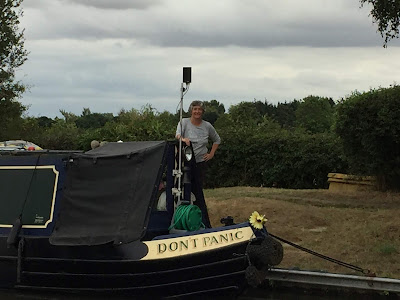 I arrived bright and early Wednesday morning charged with the task of a good inside clean and thats what it got. Genny on, Dyson out curtains down - just did not wash the walls that will have to be next times job. 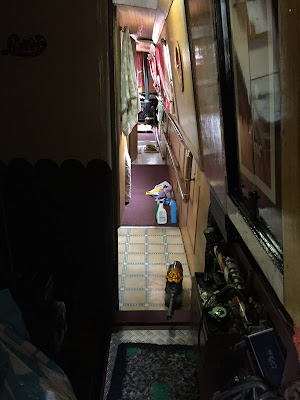 Rachel arrived from work/mother visit and we had a meal and relaxed in a lovely clean boat. Next day being my birthday we were due to cruise but went off looking at alternative moorings  - more about that later maybe.... End result was we slipped the lines at 5pm and went off down the Coventry for quite an enjoyable evening cruise.

Never seen our moorings so clear of boats. 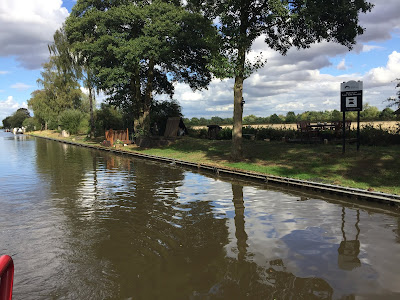 A very beautiful late evening cruise in the sunshine. 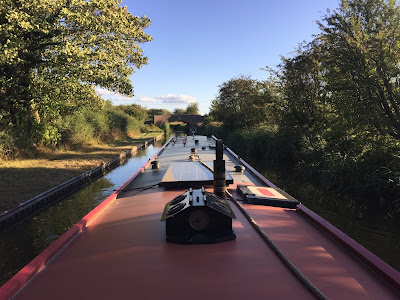 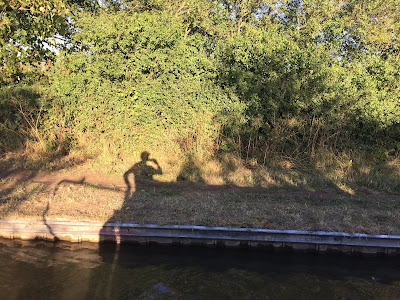 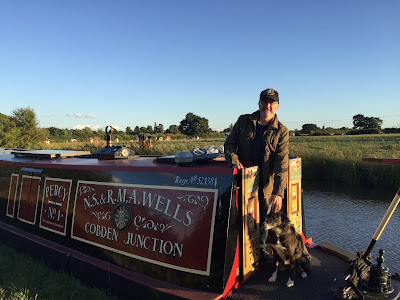 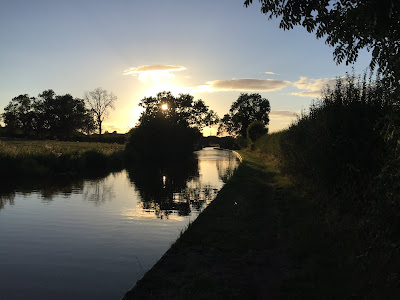 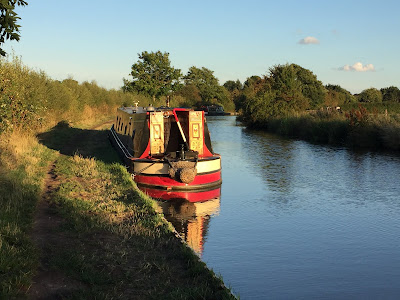 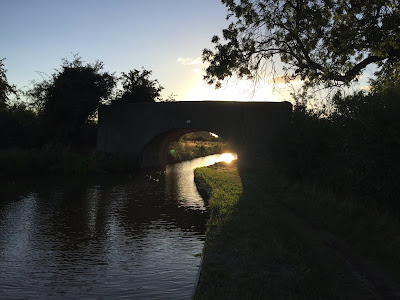 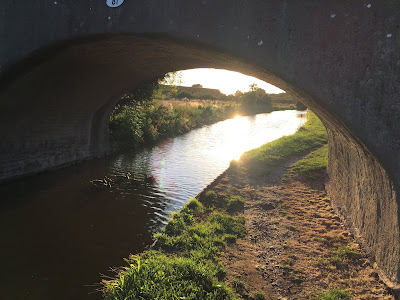 One thing you notice is as to be expected many more boats mored up so lots more slowing down, but that's not an issue to us. We eventually moored up for the night just before Whittington. In the same location I got naked on the towpath a couple of years back ! Click here 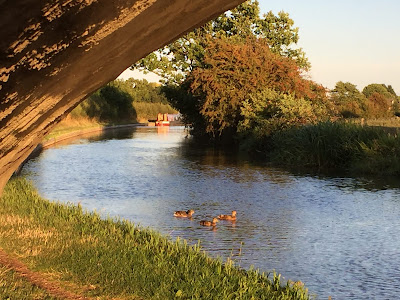 Friday am before cruising and on a cold engine  I completed a job I had been thinking of since the September cruise last year - Percy's tappets got adjusted. In September I cycled 10 miles for a feeler gauge - all around Stoke and could not get one. I have one on the boat now so was able to do this job. I need to make something to turn over the engine rather than struggling with the wheel that the alternator belt runs on. Three  litres of two cylinder engine is a beast to turn by hand.

We were due back for a 50th party Saturday nights so next day we winded just after Sutton road bridge - Rachels nemesis winding hole - she had a mare there winding Waterlily one time.... this time she nailed it and that episode was put to bed. 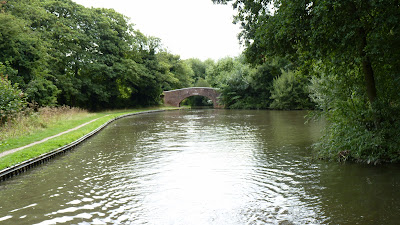 Interesting to see the red flags flying at Hopwas woods and the gates over two bridges locked off. Seems the army are now using the woods for live fire exercises 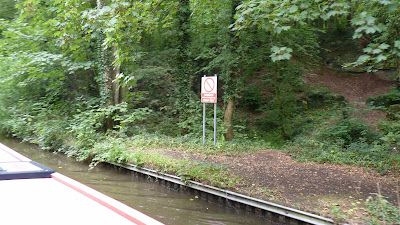 Why is it you never meet anyone on the long straights 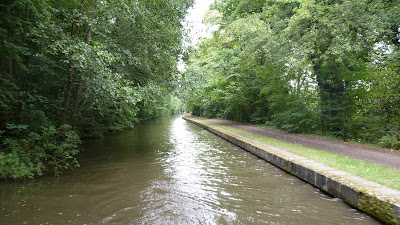 This Heron was very intent on getting a meal 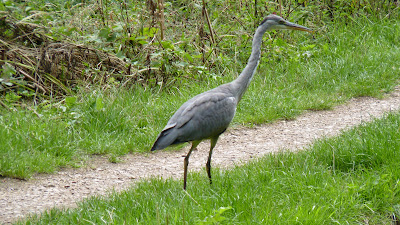 Darley on their way to Alvecote I expect. The steerer always looks so stern, last time we passed them was Stone a couple of years back  - same then, each to their own. 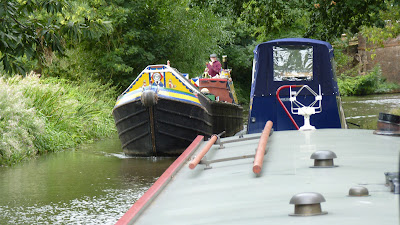 Lots of boats on the move and one caught us up and got himself in trouble at a couple of bridge holes when we slowed or were waved through as he was ever closer to us. We let him pass before we winded and he said he was not looking to pass us .... should have stayed a bit further back then....

We stopped at the Tame Otter at Hopwas for food Friday lunchtime  - all good but the coffee was awful, absolutely mixing used coffee grounds in their coffee  - not good.

A kip and then we set off again 5pm to get close to Fradley to moor overnight.

This fella has his fire lit !! 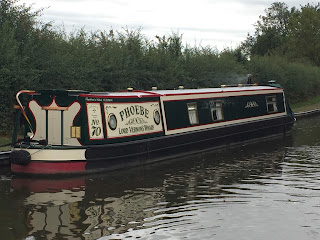 Saturday Morning we (I) was on the move by 7.15 am to get to Fradley before the rush and to use the services. It worked out fine with us loaded the car, cassettes empty watered up and rubbish off by 9am.

Now where next and the paint to talk about  !

My blogging performance has become a dribble of blogs! You would have thought the last 11 months would have seen a significant increase being all retired as I am.

However - and here is the thing (1) .... when working I felt more able to reward myself with time aboard Percy. It was the antithesis of work, a place of peace and calm and a controlled place. It was a place I went to and a place in some ways I did not feel guilty about as I was balancing my life.

Now I am a house husband and despite a very understanding wife I feel guilty if I consider time aboard when Rachel is still working away. Truth is I think I am working physically harder now than when I was at work. Not mentally harder and the background stress and pressure is not there but my body is telling me I am grafting, and I don't mind a bit of graft so I know when I am upping the grafting game !

Now I live in a beautiful cottage in a valley in the middle of the countryside. I walk out of my back door onto footpaths over fields and into valleys. The views are fantastic and the sounds of peace quite and nature are all around. (as I type this I have just heard the steam train making its way down the valley) . There is little contrast now in my bricks and mortar existence against Percy.

So here's the thing (3) .... the trump card Percy has over our cottage is change of location and I don't just mean Fradley. Those of us who own boats know that there is a singular joy in going to bed in a different idyl to that we woke up in.... with all the associated sights and sounds of the canals in between. The history, the people the structures all come to us on a ribbon of reflection and quiet (in the main) sounds of 3mph travel.

So there we are. The thing is owning a boat now has to be more than just ownership and a lovely mooring. It has to be travel and use. If not then it'll have to go to someone who will use it. 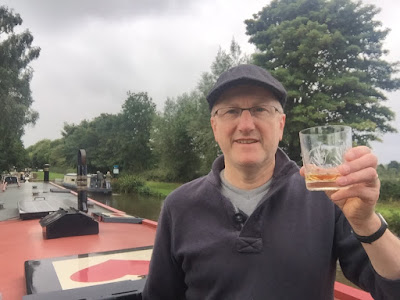 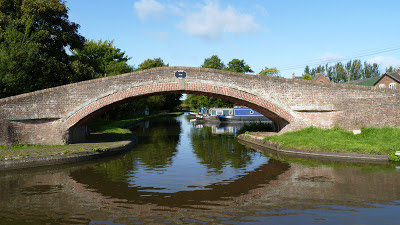 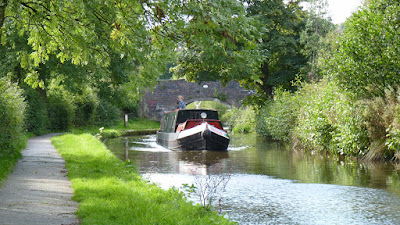 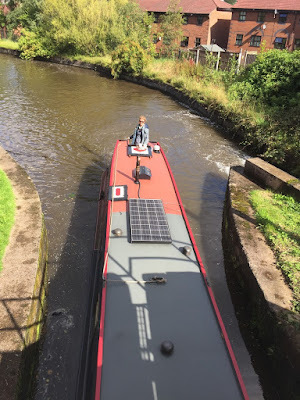 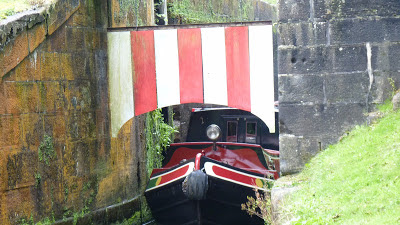 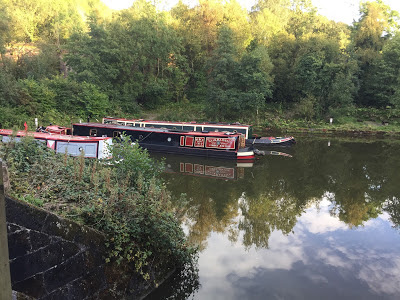 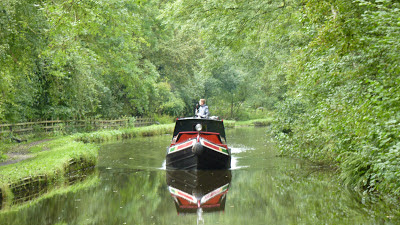