Percy gets some attention at last !

I like to look back on what I was up to in previous years, and to do that I obviously need to blog about the non boaty stuff as well.

This last week was always going to be hard, physical work and so it has been. However I did get a 'free' week last week as our planned trip the Germany on the bike was canned due to health and personal issues - not appropriate for the blog.

I used the time to get some work done on Percy pre paint. I was worried the new windows would need some work on the inside trims, depending on the depth of the 'cill' I took a window out and offered up the pice of frame I had asked for from Wesley windows. 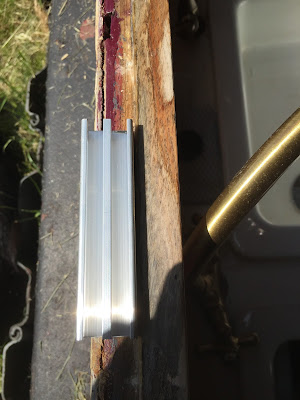 It was a great fit. I expect when the windows are fitted in there will be a small 1-2mm gap I can seal  -perfect.

The solar panel was removed, I then became instantly aware of the drain the lights in the engine room  and the cabins made on my battery bank. Solar is so good at topping up  - especially for the type of use we give the boat.

Next job was the gas locker.... most who own boats will have done this before so you know what a nasty job it is.... I did Waterlily before she was sold and that was a tight fit. Thankfully Percy has a decent size gas locker so I was to get right inside. When we had Percy surveyed the locker was highlighted, no structural issues just a job that needed doing. It always amazes me how much rust comes from steel, 1/10 ratio in thickness I think? 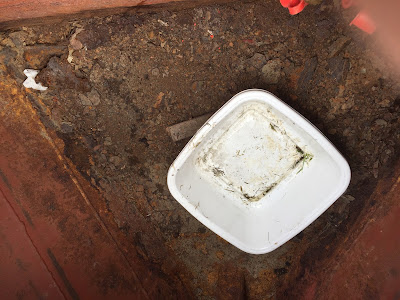 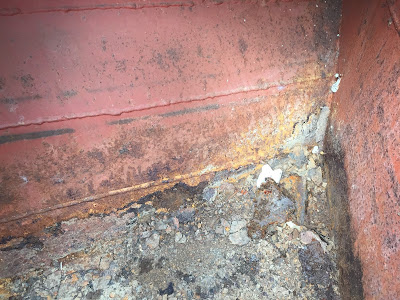 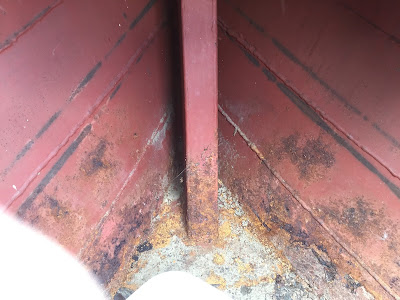 All swept first, then surface stuff lifted with a scraper then the whole locker was wire brushed.

I treated the rust with a good dose of Craftmaster rust treatment and left is 18 hours to turn the rust to a black hard surface. 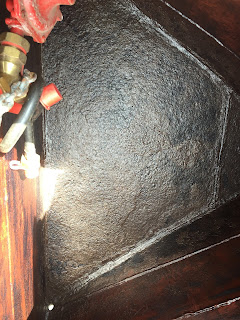 Then is was a coat of red primer followed by a good coat of raddle red top coat. I have not got pictures as I did the top coat the Sunday before we travelled down to move house down south.

I then took a drill to the roof and drilled 16 holes.... seems counter intuitive to be taking a drill to the roof but before Percy gets painted I wanted to fit the brass plank and pole holders, much better looking than the wooden holders. All 16 drilled and tapped without drama. 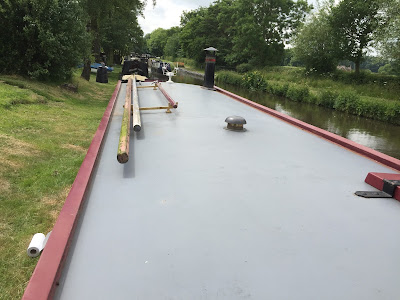 I then did a very good swap of coffee(no gas to boil the kettle) and cake for my lawn mower with Mandy on Don't Panic. Good to have your own mugs ! The cake was even better than it looked, and it looked mighty fine. 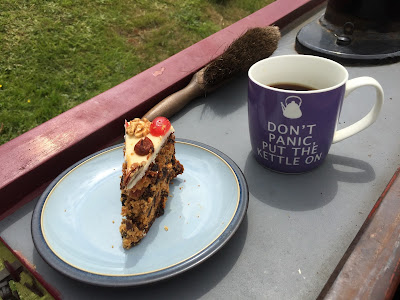 While I had the drill and taps out I put on the diesel and water plaques that Tony refused to fit, he just taped printouts close to each for the boat safety arguing that if even if you got them the wrong way around you would not be able to start the engine or drink the water... no one would die I guess. I wanted them on as they look good !

Then it was a blast down south to move from one cottage to another than involved two deep cleans and a lot of packing, moving then unpacking.

The landlord of the pub we were moving away from took pity on me and offered me a free pint .. 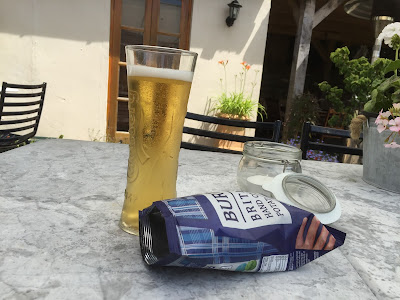 After giving the old cottage a deep clean yesterday I took Leia for a walk to Bosam (about 3.5 miles I think) It was a lovely evening to sit and watch the tide come in.... just needed a decent sea rod.... 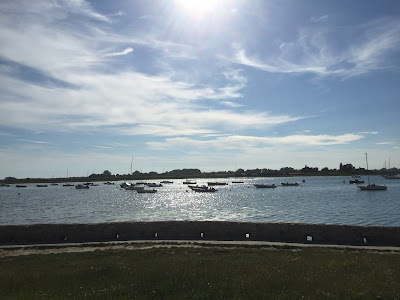 Today has been a quieter day, waiting in while a few job were done on the new cottage. 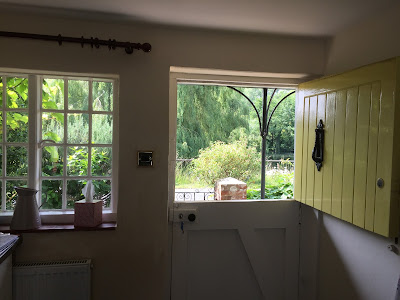 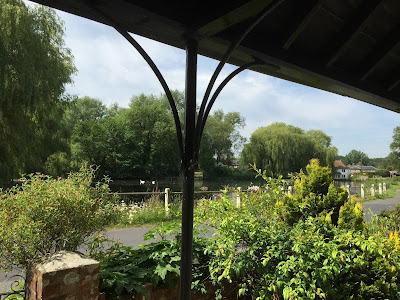 Next blog should be back on the boat as I take it down to the Stourbridge canal for its long awaited paint job. Hopefully this will be a relaxing aspect of up to now been anything other than a holiday ! Just need to drive up to the boat, clean the bathroom/kitchen and water up, get provisions and maybe pop it to the top of the Fradley flight while my friend John drives down from Scotland to help me.

.... but for my diary blog. Cancelled trip on the bike to Germany due to health issues (not mine) so we have other stuff now to do that has jumped up the priority list.

We went to London Town yesterday as it was Emma's birthday, she is the long suffering other half to our youngest son Callum. We ended up here and here. 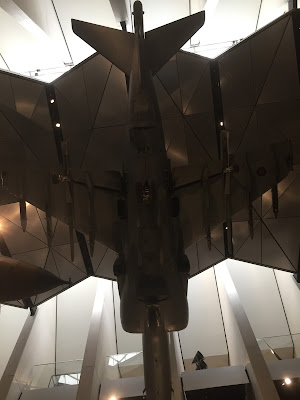 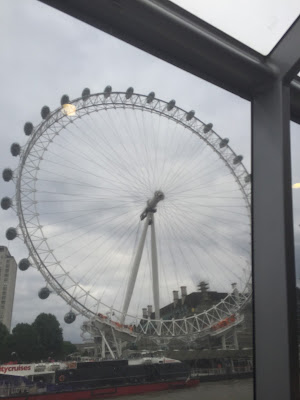 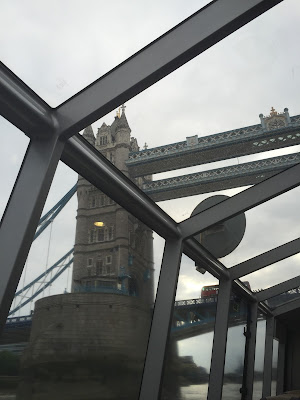 Yep we took the Thames 'commuter' boat from Embankment to Greenwich.... nice and slow to start then they announce we are going top pick up speed and they sure do !

All very poor pics (the first was the Harrier in the Imperial war museum.) only did half of one floor as we got there late.

Today was a lazy day getting ready for the big pack and garden for the cottage move. Later this week we will be on Percy taking advantage of the extra time to pop out the windows ( hopefully) to router back the trim so the new windows fit after the paint job in July/August.

Paint colours have just about been agreed on and so has the sign writing. Just need to get Percy down to the painters in late June then get on with the house stuff while the boat is away.

Onwards and upwards as they say !
Posted by Nev Wells at 20:15 2 comments:

Help me out here....would you believe boat heating ?

The sun is at last shining and the weather is slowly warming up so I am thinking about the winter aboard Percy... or heating in general. Somewhat influenced by a post by Chas & Ann off NB Moore 2 Life

So do we keep the simple, no power option of coal, back boiler, no pump but hard work and not an option to "On with the radiators to kill the chill" ?

Diesel stove and rads - well 32mm copper pipe, but have to have a power sucking noisy pump ....

A diesel stove ... (how instant is the heat from the Reflecks) and separate boiler to provide   "On with the radiators to kill the chill"

Keep the wood burner but cap off the back boiler and add a separate boiler to heat me pipes  !

My leaning is the latter but what boiler to install...(I need a low power using boiler)

If nothing else it keeps my mind off other things .... your thoughts & experiences would really be appreciated ?

What you get for your money...!

I got my canal mag this morning. A nice review of  I guess one of the last Hudson's to be built, which is sad. The price  - Circa £150,000, wow that is a lot for a boat and whilst a Hudson it was still a lot of money for the space it provided.

We have a casual eye on the property market as those who know us well will understand why. Down south where I spend some of my time the property prices are just eye watering - in a bad way as you get so little for your money. There does seem to be a lot of money down there as property comes onto market and sells quickly.

£270,000 for this one bedroom property in Chichester

£260,000 gets you this 4 bedder with land and views to die for in Dumfries and Galloway

Property prices seems to be ever lower in Scotland right now but peaking in the south.... or you could just buy a boat from 20k to 150k and have whatever view and location you want - so longs as you are ok living in a large pencil case !!