On another mad Saturday I actually got a boat job done .... 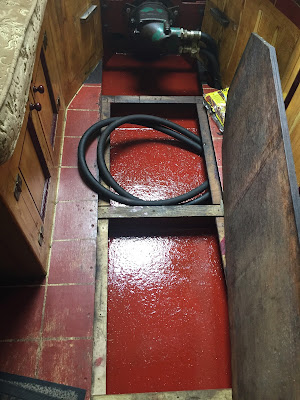 So that's a degrease, rust treatment (1 day) prime (2nd day) and then this pic was the bilge paint   - job done apart from putting the floor back and returning all the paraphernalia to its normal home. I wonder who will open this area up in the future to do this job again... maybe in another 20 years hopefully   - Me !!

Before I got to the boat I went out in the dry then rain across the Peak District (lovely)  to look for motorcycle boots (CMC Chesterfield) as my trusty Altbergs now leak a little and with three trips on the bike coming up I need dry feet as one trip is Scotland.

Then over to the boat to pain the bilge.... then over to Uttoxeter to get some rubble sacks from B&Q for a little cottage job, then home to the cottage.

I celebrated Sunday by filling 27 rubble sacks with excess stone and giving the bike a good wash as I may be selling it ... wanna buy a nice 2008 Honda Deauville just passed its MOT for another year ... 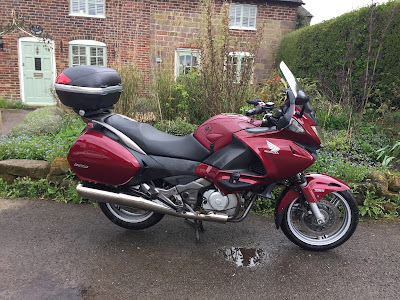 The really important news is Teddy Wells hit one this weekend  - a lovely afternoon with him celebrating and opening many many presents. 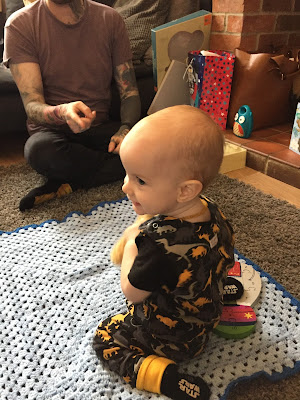 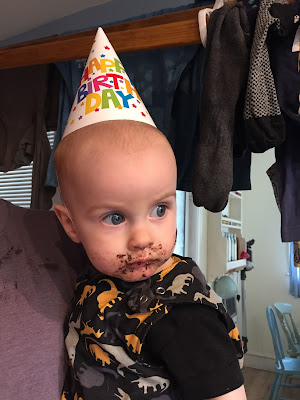 Other people living their dreams

I spend some quality time between the boat and the cottage recently. While at the cottage working in the garden I kept hearing the whistle of the steam train in the valley.

The Churnet valley railway have been running an American locomotive  - well I recall it has USA on the side! Anyhow it has a distinct whistle - see the blog about the valley monster here .

When working away it was apparent it was a different loco and it was also making more runs so we set to and walked to the valley floor and sure enough a little green Pannier tank engine sped over the river bridge just as we were walking under it.

Seems they were running an 'experience day' where you can pay to be an engine driver for the day... living the dream for some. I waited for it to return from Froghall for this little bit of video

I know I keep prattling on about how beautiful this bit of canal is, well worth the trip up  - plus there is a lot of wood waiting as a reward ! 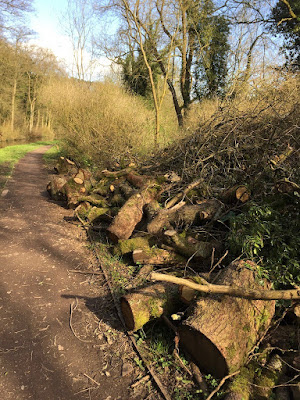 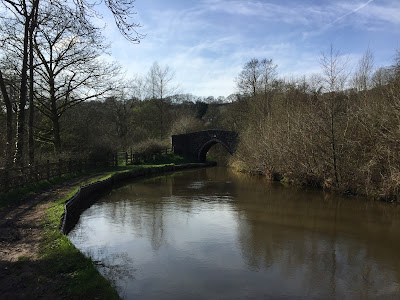 It also looks like we have Deer in the woods.. 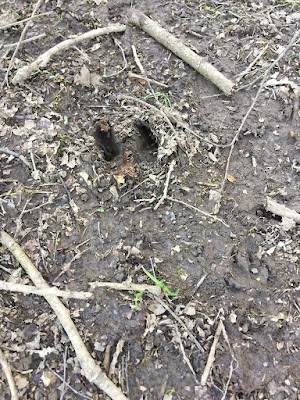 When a job gets a bit bigger...

On and off the boat at the moment. It was convenient for Rachel to drive to me last Thursday late getting to the boat at 11pm but it gave us a lazy Friday. It also enabled us to leave a car at Fradley so on Sunday I could drive Rachel back to Fradley taking an hour off her journey south !

I was staying up at the cottage as I needed to do some work on it as well as Percy as well as lots of other bits and bobs....

We had a great vegan Sunday lunch at the cottage and was able to play with Teddy for a decent time  - he is growing rapidly and getting ever more interested in everything. 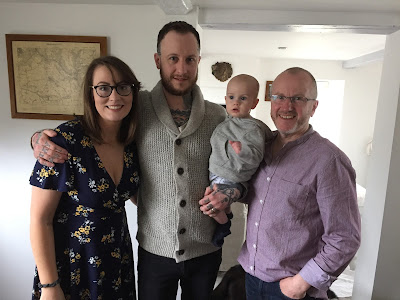 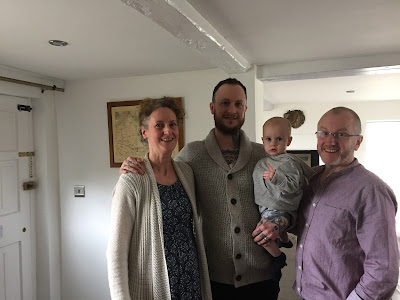 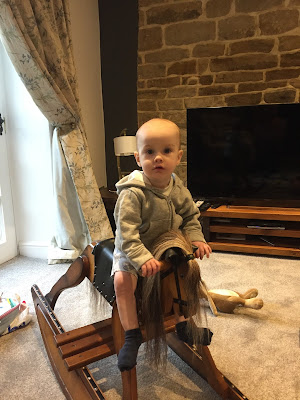 Anyhow yesterday I was on the boat and repairing the hole I opened up to sponge out the water we (Rachel) put in there whilst cleaning up last year. She left the tap running while Dysoning and it overflowed into the cabin bilge - not a lot but it made me make the inspection hatch that was missing and ID'd on the survey five years ago !! So now we have an inspection hatch!

After that I started to get curious about the back cabin bilge area (the engine room has an open bilge /open floor) Tony had said there was coiled hydraulic hose for the pump that drives the prop under the floor. So I set to to lift the floor which thankfully was laid to allow this.

The good news was it was relatively dry  - a little water but nothing to worry about and more than likely come in from when I left the back doors open in the rain the other week ! 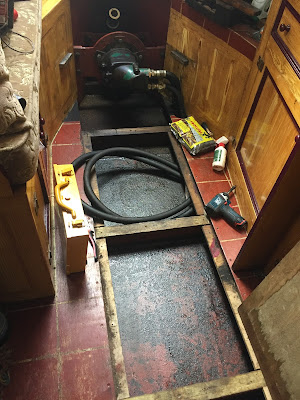 I cleaned it all out and applied some rust treatment and maybe tomorrow I'll paint it with red oxide as I did the gas locker.

As to how long I need to leave it before I do it again.... well there was some paper in there and I was able to see it was from Saturday January 23rd 1999, 7 years after Percy was floated and some 19 years ago so when done I'll stick some more paper in there and hopefully be blogging about changing it when I'm 74 eeek !! 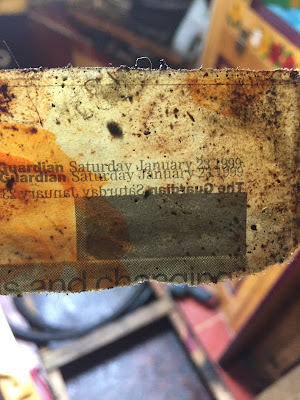 I spend the rest of the day mowing grass and general mooring tidying. I did want to get out on Percy but now the floor needs painting that'll be my boating this week !!

Women on the cut

This film popped up and is a fantastic insight and record of women on the cut. It features Alex who sadly died on her boat, it is a great tribute to her and her ownership on working boat Tench.


Spend some of your bandwidth on this production, it is beautifully put together.
Posted by Nev Wells at 08:45 No comments:

The end of blogging ?

For lots of reasons I am retired but still not spending much time aboard Percy. That's a bad thing. I am sure if you read blogs you will also be watching many Vlogs on narrowboat life. I have a subscription to many and they are tv quality in the main with episodes released that are devoured with much relish.

Problem is they are so good I am starting to feel like I have seen and done most of the system, albeit vicariously on lots of different boats.

Don't get me wrong I do enjoy following the vlogs and they give so much more than reading many on the list to the right ...but in a simple way they are showing me the system in great quality from my armchair. Not sure if it is the start of the demise of blogging about the canals, I blog of course as my online diary that I can look back on - so will continue but are the Vlogs demising my future exploration/enjoyment of the canals?

On an unrelated note other than related to this being my diary of sorts I have enjoyed the last two days of good weather by getting out on my motorbikes. All over the south coats and south downs .....

Some pictures just as a reminder when we are no longer down here ....... 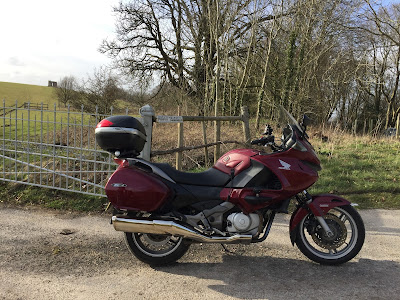 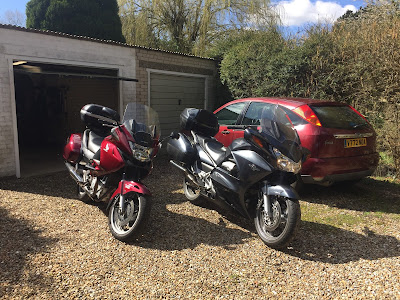 I test rode this yesterday.... its an NC750 (New Concept) it has half a Honda Jazz engine in it  - low revving super economy quite a nice bike 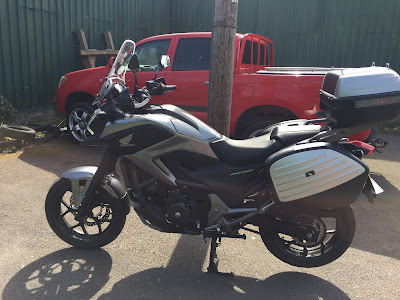 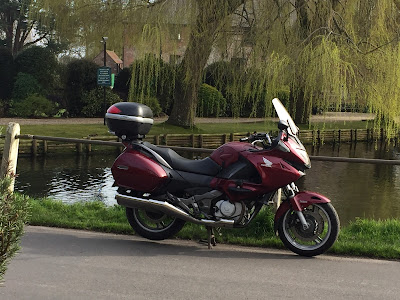