We have just had a  nice last 2014 meal in which we reflected on the last year and pondered our 2015. We were not sure where we were this time last year... checking back on the blog we were actually on board for the New Year in 2013, without any forethought or inkling what 2014 would deliver.

It is ironic that in 2014 I posted on 48 (including this one) occasions - less than one a week and I lived aboard for 6 months of the year - I think that says something, not sure what ? Last year it was 94 posts....

So for my record we were in a cottage in the South Downs for the New Year 2014.... lets hope we are all fit and well to blog about where we are New Year 2015.

One thing that has been missing in 2014 is motorbike miles,  (certainly compared to 2013) last time I rode the Pan was in July  - ironically a week or so before we moved out of the house. It would have been so much better if we had got a place with a garage down south but the place we have costs enough so that might be on the wish list for 2015.

Anyhow, tomorrow Rachel is at work so I will do my annual review of the year, always a good time to fully reflect and plan for the New Year. As she is on an early we will be asleep when the New Year arrives so I will end with a wish for one thing to you all, good health as without that the rest is much less important.

We moved our Derby base to Staffordshire on the 9th July. I guess you could say it was all downhill from there.... well light wise it was  and until you live on a boat for an extended period of time you do not understand how dark the experience can be !

Ok so not a doom and gloom post but the reality of living while still working on a boat is you get up in the dark and come back in the dark. No daytime cruises to get your vitamin D. I spoke to Kev my neighbour and he casually said it is an existence over the winter aboard. This is much the case when you are off the grid and living on 2 leisure batteries. It can be cosy, it can be romantic(not when you are on your own mind) but it is bloody dark most of the time. The irony is I bet when I return to land living in the spring (good timing !!) to sort out the house to sell I will miss the boat I guess, even more so as the days will be getting lighter all the time.

So why the post today.... well I pushed across to water up and empty the cassette, and then decided to give the batteries a real good top up as well as top up my vitamin D with some wind blast sunshine and rain. We only went to Alrewas and back for winding but it was a challenge in the wind. Talking of winding, the Alrewas winding hole can be a pig if the wind is in the wrong direction, today it was and would have caught me broadside and slowly pushed me onto the far bank if I had not passed the stern rope to Rachel whole kept the stern near the armco while I winded - almost felt like I knew what I was doing!

The one more day is tomorrow up to 23:03 when the earth's orbit sees it lengthening the exposure to the sun in our northern hemisphere


The winter solstice itself lasts only a moment in time, so other terms are used for the day on which it occurs, such as "midwinter", or the "shortest day". It is often considered the "first day of winter" or the "start of winter" (Lidong in the East Asian calendars), although in meteorology winter spans the entire period of December through February. The seasonal significance of the winter solstice is in the reversal of the gradual lengthening of nights and shortening of days

So from 23:03 tomorrow night the days get longer and the nights shorter and it feels like survival, only some consider tomorrow the start of winter and as we all know we have yet to have a blast of cold weather for any sustained period.

Bottom line is we moved the boat today, we are together now for 16 days, it's Christmas in 5 days time and goodness only knows what 2015 holds for us !

Happy Christmas and a safe and secure New Year to you all. 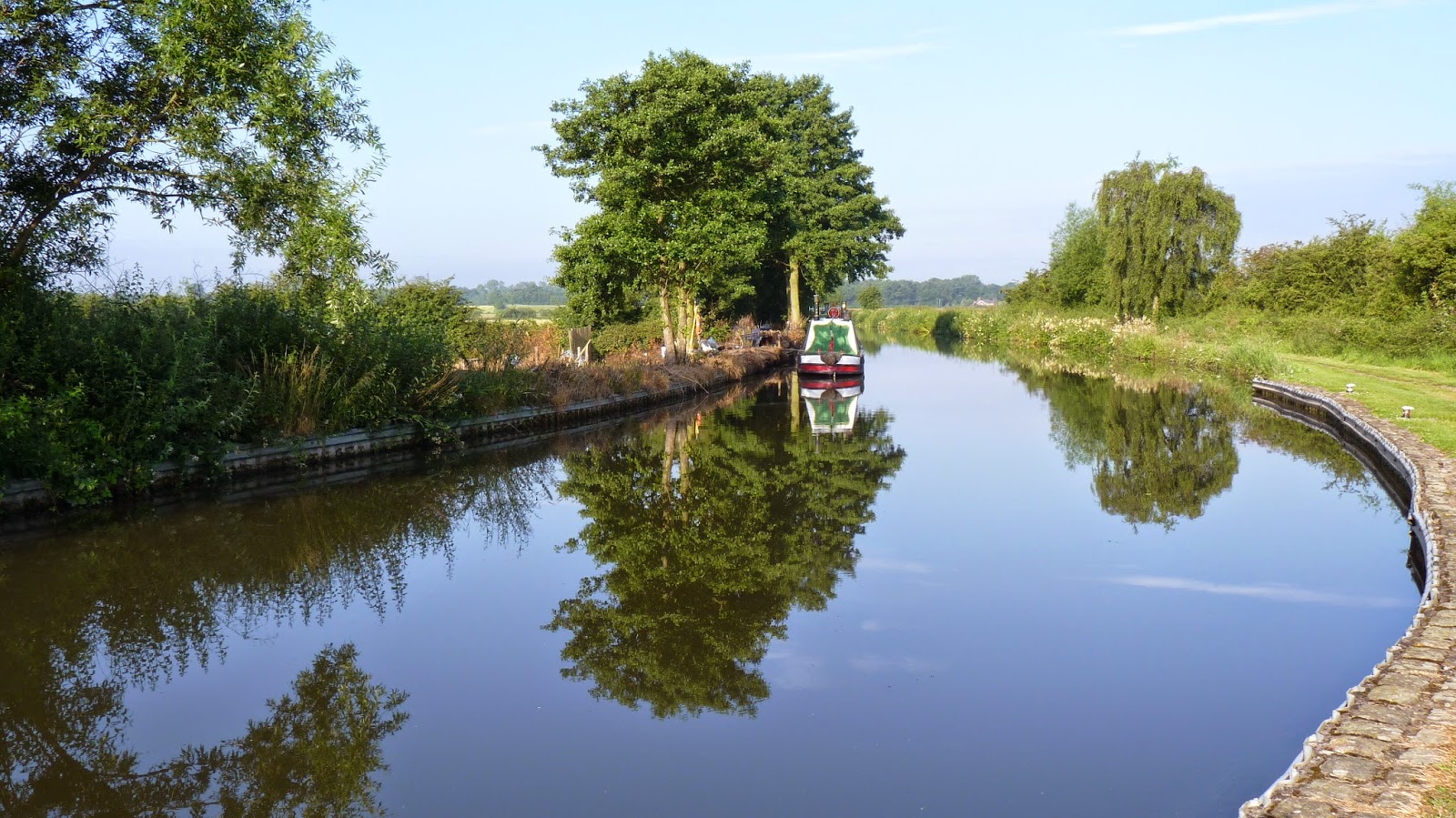 Fellow bloggers. Totally remiss of me not to have posted while I enjoyed the hospitality. Being on board part of the time now I do get to intercept the bloggers I know as they come through.

It started mid summer when John and Louise brought Ploddin'Along through Fradley.... 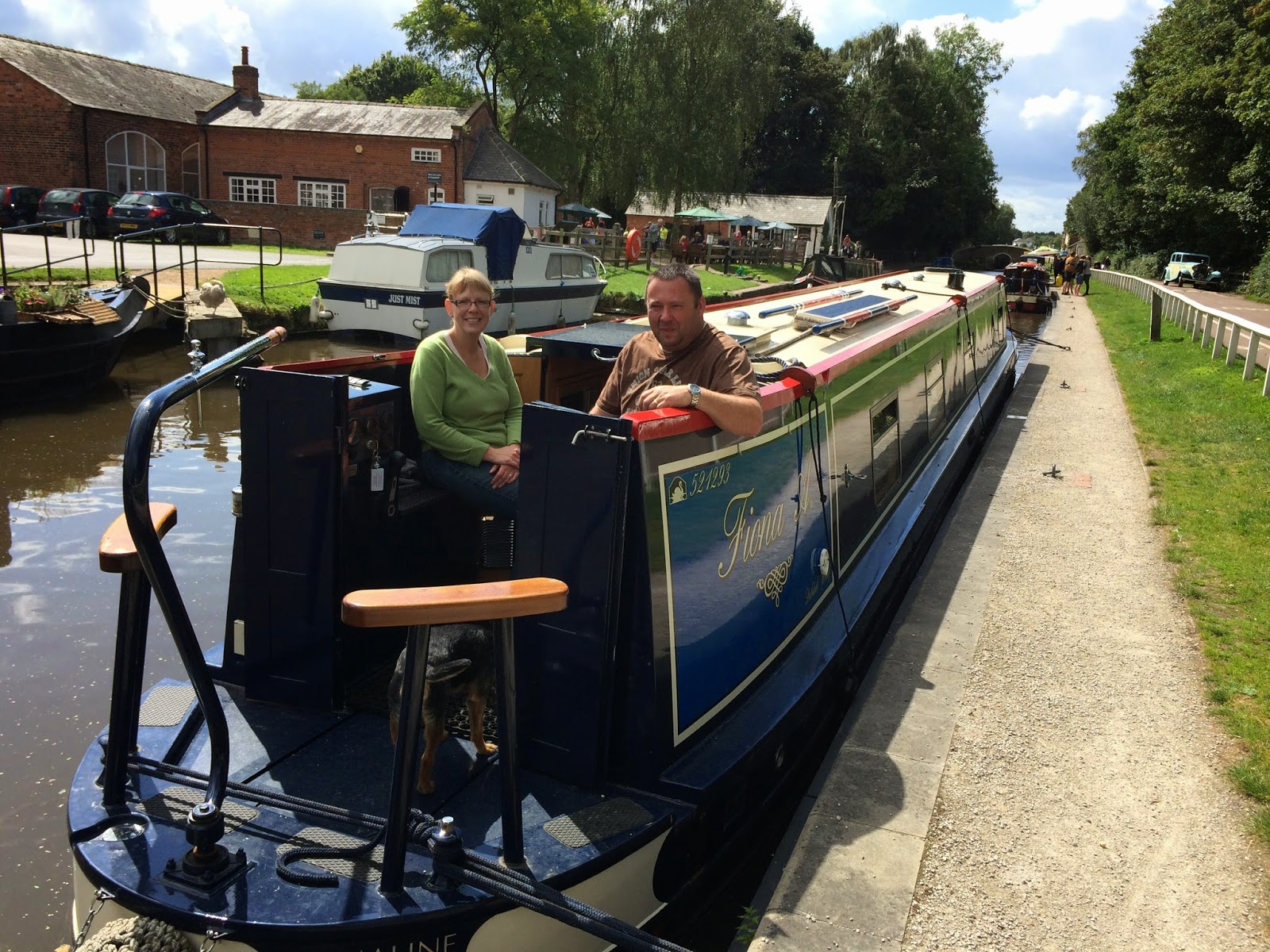 I got an invite for drinks and a show around what is a really well spec'd and comfortable boat. I am sure it will get many lock miles under its baseplate in the coming years.

Next invite was from the 'A' listers on the cut, Doug & James from NB Chance. I was welcomed aboard as if a long standing friend, the red wine was top class as was the boat and company. 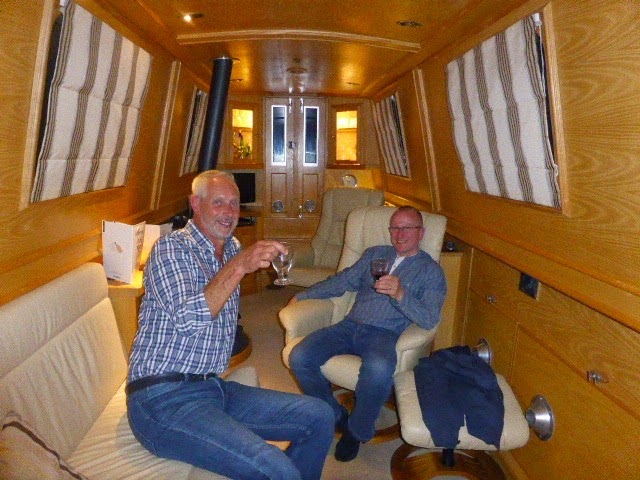 The next invite was for a curry in Alrewas with Halfie and Jan from NB Jubilee while they were out as part of their first decent retirement cruise, as I recall I think Jan had technically retired either that day or that week. Anyhow we had a great chat over food and back on the boat. 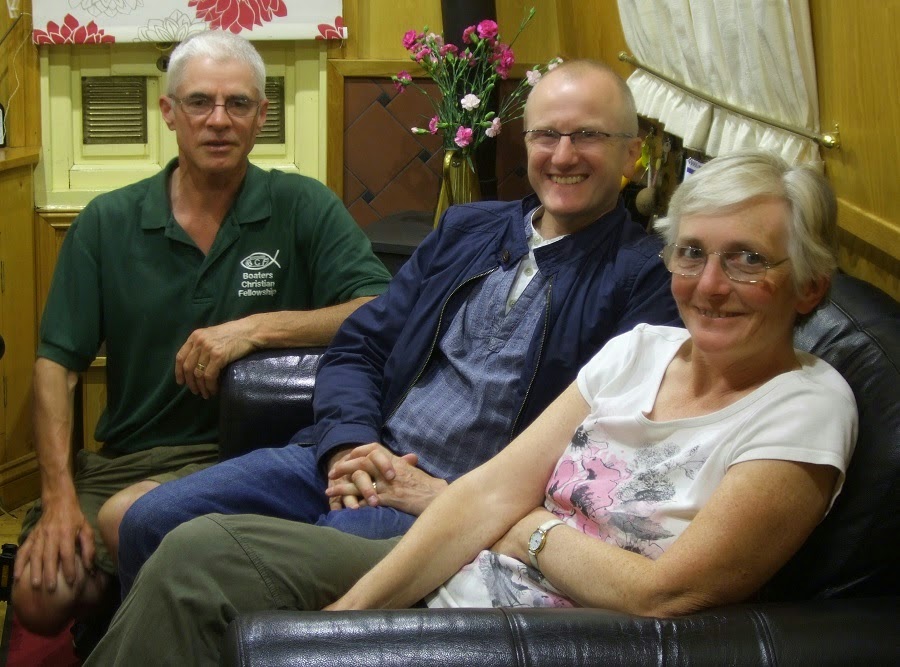 After Rachel departed one Sunday for her long drive south I went looking for more long term live-a-board bloggers, Lesley and Joe of NB Yarwood They had just had a new Refleks stove fitted and I was interested in the install and the performance. We had a really good chat and I walked with them through to Common lock after watering at Fradley. Fletcher and Floyd put up with Leia while we talked ...... 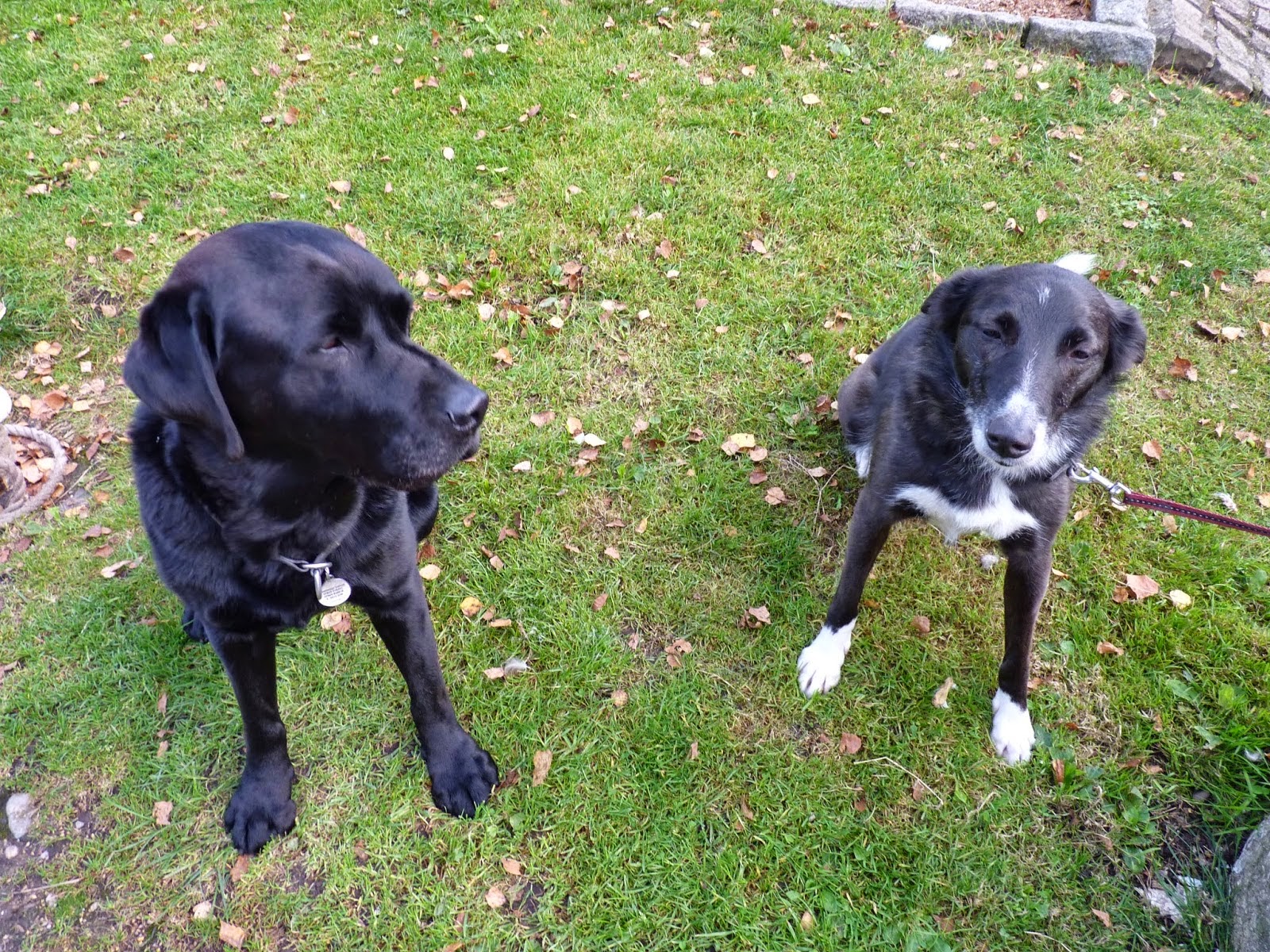 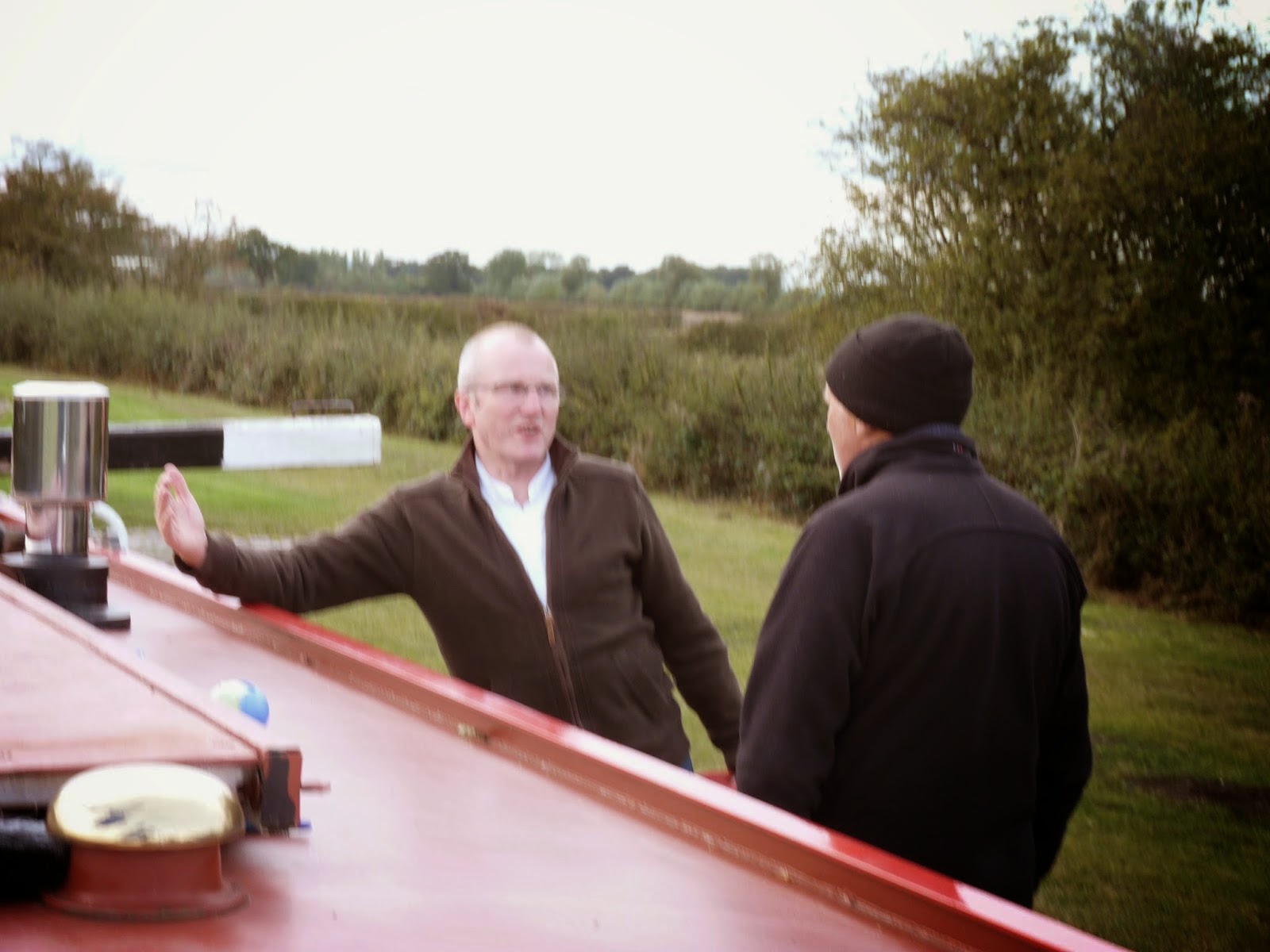 Our most recent visit was to Geoff and Mags from NB Seyella We hailed Geoff as we were walking to Woodend lock last Sunday and he kindly invited us in for tea on our way back (plus home made cookies !) Look at the symmetry of those logs on the roof... you can spot a long termer by his logs !! 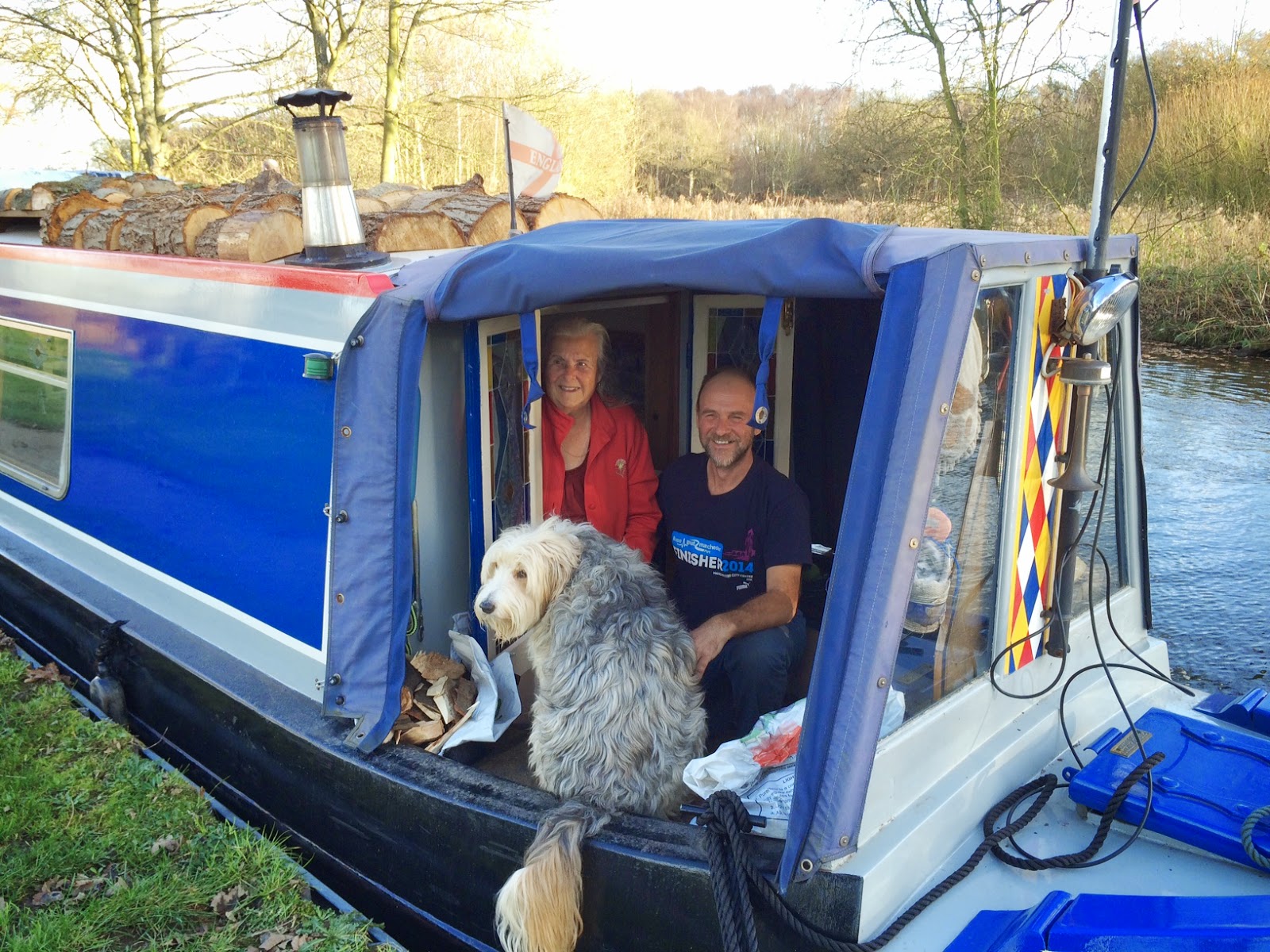 We were alarmed to read that Mags had been in the cut at Colwich seems apart from some bruising she is ok, now that is a tough lady.

So if you are passing invite the cuckoo aboard.... ;-) Or if the lights are on and the smoke is being made breast up below Hunts lock and demand Tea !!

It has been good meeting you all and you have helped me settle into what can be a challenging and sometime lonely existence. I will look out for you when the ropes eventually are untied and Percy starts his system voyage.

Do you agree with my thinking here...?

Frustrated from Fradley needs some advice!

I trumpeted my battery swap out here....Clicky Over the last few weeks I have been frustrated with the performance of the new batteries, any small load (TV 25w ) sees big %'s drop. initially I put it down to the Smartgauge calibrating the new batteries, but the solar controller was giving me its verdict of half empty batteries too often.

I began to suspect I had a bad battery. So last night after watching a dvd via the Mac HDMI link to the tv I went to take Leia out and the Solar controller was giving me the red light and the Smartgauge was saying 47% dropped from 74% and a voltage of 12.2  That % drop was not consistent with running a 25w tv for 3 hours with a few pump cycle and little lighting as we had the Christmas tree lights on !!

So this morning it was on with the overalls, the genny was set to charge the computer and Ipads up while I investigated. The multimeter said the starter was sitting at  12.76 v and the two leisures were 12.74 v so I disconnected the two leisures and they were showing  12.58v and 12.91v Now they were new together so you would expect them to be close to similar voltage when not connected (am I right here?)

So I swapped the starter with the lower (questionably faulty battery). Gave the engine some TLC, the 1929 design means an oil can rather than oil pressure lubricating its workings... and started the donk up.

It went to EP  - engine battery priority, basically putting all the alternator output into the starter battery  (for those who would be interested in the Smartgauge/Smartbank system the manual is here ) I expected this as the questionably duff battery was low and starting the engine would draw it lower so the system gives it all the alternator output.

It then went into connected mode (CON) meaning it was charging both starter and leisure, however this went on far too long indicating to me that the starter was not taking the charge as it should, the smartgage was detecting this and keeping it connected (via the relay) to try and get it to an acceptable level (am I right here?)

So the test will be in how the two leisure batteries hold up over the next week. I am not a power user, water pump, shower pump some low power lights, no fridge at the moment just the 25w tv. I'd expect the two 110a/h batteries to cover this with loosing only a few % each evening?

Any advice or observations welcome.


PS.... I drafted this last night while out at my sister in laws, came back to the boat at 11pm from leaving at 3pm to find I had left the inverter on and the engine room light.... only lost a few % on the SG so that looks promising.