Such a waste of time

Another visit to Percy to participate in a nations pointless pastime ..... mowing grass, what a waste of my life cutting grass is. It’s trying its best to photosynthesise for our benefits and we just cut it off in its prime.

It is once again too long between visits .... I swear since I have retired I seem to spend less time on Percy. That means when I do have to cut the grass it is long and therefore much harder to do. If I was a little less considerate to nature I’d also use weed ( read insect) killer on the weeds that love to grow between the slabs and the piling.

It’s all done and looks good. We did use the the visit to bring a load of stuff back to the boat ready (hopefully) for our Llangollen trip, some more logistics needed prior to that but what we brought today helps ( including two bags of coal.... am I tempting the weather fates).

The real rub is that by the time we come back the grass will need cutting again ! 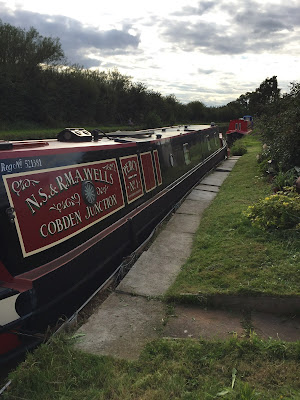 Sadly time to get rid

Nope not Percy but I'm delivering on my pledge to change.... remember that, read it here Click Me
Specifically I planned to scrap my old Rover I typed;
"My old Rover is financially worthless but it is also a diesel, 35mpg, very heavy, large and in the main overkill for moving me and Leia around. It's high tax as it's a relatively high emissions diesel vehicle."

A quadruple dose of good has come from its sad (to me) demise.

So I feel good today, it helps the IQ fits in the garage (just) with my bikes. The IQ has a tax of just £20 per year - the Rover was £320. The savings I recon on fuel will be over £400 per year and servicing will be cheaper as well as hopefully less MOT work in the future (its only got 34k on the clock)
Here is the wee beasty 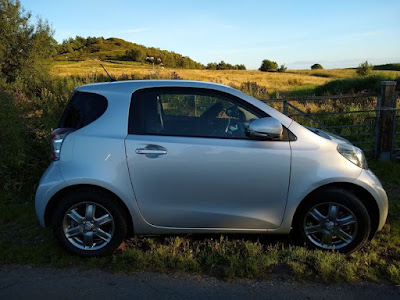 So a homage to my Rover.
I brought it in January 2015 from a dealer in Burnley, found for me by my then transport manager at the Uni who I provided a spec of a car I wanted to replace the petrol hungry and wallow'y Honda CRV (That I brought specifically to take my late father in law back to Wales for one last visit in 2014.) James came up trumps with a Rover 75 Tourer 2.0 Contemporary SE 5DR 'Genuine 66k + FSH + Massive spec! (the advert I still have)
I needed a comfy tourer for the 200 mile each way trip I was doing each fortnight to Chichester where Rachel was working  - its all in the blog ! I'd leave work on a Thursday evening and then drive the three and a half hours to Rachel, work at home on the Friday then on the Monday morning my alarm would go off at 4.45 am and I'd be on the road for 5 am to get to work in Derby for 8.30am.... after stopping off a the boat at Fradley to drop Leia off and in the winter set a fire going so the boat was warm on my return in the evening  ( another 30 minute drive from Derby to Fradley)
I needed a mini limo that the Rover was with leather fully adjustable seats cruise control decent lights etc etc.
The Rover was also used a van, my youngest son will attest to this as it was used to transport literally tons of stuff from his flat refurb to the tip in London - I even drove his cut up bathroom suit from London to Ashbourne to the tip there on my way home one time !!
Indeed its last trip for us was to take a load of sleepers from our cottage to the mooring to make some better steps and a small retaining wall. 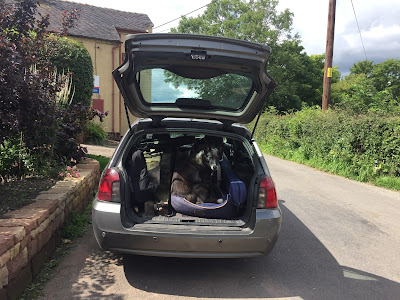 It only let me down once when the alternator expired at about 130,000 miles.
I brought it at 66,000 miles and drove it to 158,000. The biggest mileage year by MOT I think was 22,000. Now retired I think (not counting the bike miles) I'll struggle to hit 6,000 miles.
Simply the best car I've ever owned by a country mile, but not what I or the planet needs now so it's just started its last journey. Its a shame in some ways it'll not be stripped for parts, there is a very helpful and active Rover 75 community, but this way it'll be as the pick up driver said "baked bean tins before you know it" So for now every time I open a tin of beans in the future I'll reflect on my trusty old Rover how great a car it was for truly strange living times for Rachel and me. 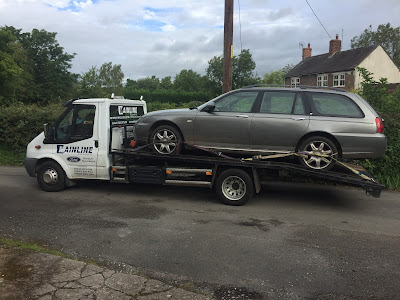 RIP faithful and much loved Rover