Sadly Les has to quote Maffi 'swung his last windlass in this life' It's always hard to accept someone is no longer with us  but now a loved and cherished memory for all those who he loved and befriended in his life.

My thinking on death is that you move to a memory and live again in everyone's hearts when you are spoken of .... this keeps going until the last one who loved talks no more and you pass to whatever and where ever  - I do not know.

I hope and I am sure Jaq will cruise on and we can raise those memories out on the cut where Les was at his happiest.

Too many are passing on in my life for it not to be a reminder, a strong reminder that dreams are only reality for those brave and strong enough to pursue them.

Last time I meet Les was on the Coventry and I blogged about it here....

In memory of that day I have copied the post and the picture so I have the memory on two of my blogs.


It's something you hear about when people refer to the old working boatmen and women, and rightly so. They had a hard life and the latter workers stuck at it and in some ways bridged into the next 'life' of the canals. This new life is characterised by the live-a-board, those who take a brave decision to move aboard, yes I think it is brave to step aside from the umbilical cord of bricks and motor and all the connectivity that comes with it. So these people are the new generation and in my opinion true custodians of the waterways, they look after it for me while I am at work ;-)

So today I met canal royalty. I have hailed Les on a couple of occasions when doing our own bit of cruising. I then started to read of a true romance (and I'm a bloke remember) his princess lived thousands of miles away, living a completely different life. I started to wonder if was reading fact or fiction, it was so unlikely but so worthwhile, especially as the two life journeys had been so seemingly difficult. The writing was compelling, the story was absorbing, as soon as a blog entry had been consumed you were left waiting and wanting more update, the next instalment.

Like all fairy tales this one had the very best of endings, the English gent gets his bride and the princess gets to live in her stately home.

So back to today, I visited that stately home and it rivals the best. It's one full of love and laughter. It represents everything that those desiring to live-a-board must aspire to. It was certainly helped by the lovely smell of baking cake when I was invited aboard!

We chatted for a good couple of hours about life, boats, culture plus much much more that will no doubt come to me in reflections as the days pass.

So in my book this pair are canal royalty as they represent so many canal users but they are at the top of the tree in their story, their use of the canals and what came over most was the love of the life they lead. Better not shout about it too loud otherwise there would be a massive rush to buy boats.... and I know how hard that can be !

I came away inspired, certainly by the lifestyle but I think more so by the obvious love and affection between the pair, it was nice to see the last chapter of the book in real life. Long may they cruise the waterways. 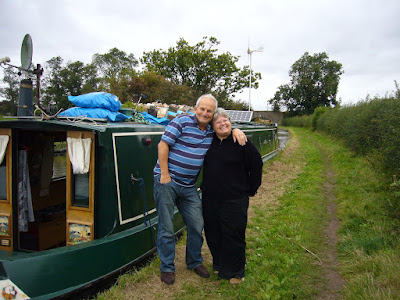 I look forward to meeting up and I cannot think of a better way to keep Les on the canals. Take care of yourself now. x