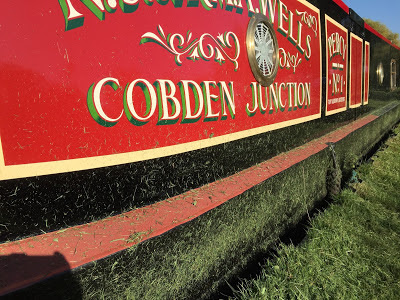 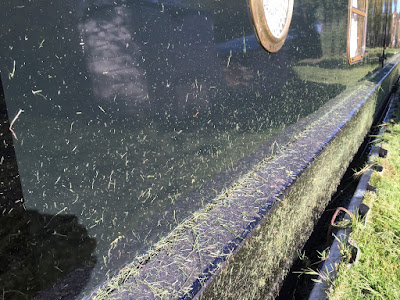 This is what my good neighbours called me about the day after I brought Percy back from a back to metal repaint in October last year. If you search for complaint on my blog you will see I have updated a few times on the progress of a formal complaint I made to C&RT.

I have now settled the complaint with C&RT.

My observations.... I'll not give the full detail of the final settlement other than to say C&RT have accepted their contractors did indeed damage the newly painted boat. On my suggestion C&RT paid for a surveyor to inspect the paintwork, I asked for my surveyor Balliol Fowden who has surveyed all my boats and he did the inspection with myself and a C&RT representative and his report concluded there were stone chips, albeit superficial on the side that was peppered and not so on the other side.

This was independent professional proof Fountains had damaged my boat.

I then left it to C&RT to speak with their contractors as to how they might address this and with the help of two very professional members of the C&RT management and directorate I received an offer I have accepted.

After a slow start and some confusion on the responsibilities of contractors and contracts C&RT have been very professional and I'd say supportive. They have followed stage 1 and stage 2 of their complaints procedures very carefully and I have received polite and effective communications for which C&RT should be proud.

I think this has been a learning exercise for them and I am aware of positive discussions at director level between C&RT and Fountains to progress this complaint but also thankfully address the risk assessments and method statements associated with grass cuttings adjacent to boats.

My learning is be patient and professional, I have never been rude or lost my temper, I have been frustrated and angry but not taken this out on the people dealing with the complaint.

All in an a frustration and I have damage to my boat that I'll monitor and repair as and when it is needed but I have faith in C&RT. So it is a well done C&RT and hopefully Fountains can start matching the professionalism of their contracting trust.

One final important note to me is I only accepted the C&RT offer on the condition the financial side was recovered from Fountains and C&RT were not financially disadvantaged  - I have received this assurance. C&RT's costs are in the learning process that I think is a good return however painful it was for me.
Posted by Nev Wells at 08:38

Congratulations Nev for reaching a acceptable conclusion to this incident.

You are so right in saying that to '... be patient and professional, I have never been rude or lost my temper, I have been frustrated and angry but not taken this out on the people dealing with the complaint.' was certainly the way to go. I just wish that more people would adopt your train of thought!

Good result Nev. I find that sticking to the process and not letting it get emotional is the best approach with any large organisation. The contractors need to be responsible in how they discharge their duties.

Hi Andy, I have dropped you a line vis the cart web site to let you know who in C&RT did well as my boater rep ! I really do hope Fountains sort out their processes for doing the work and again if they damage something. Sadly I am aware another boat on out moorings got its window broken as they continue to strim up to boats.....I was advised CART get 3 or 4 damage claims a year and this year they have had 2 on the Hunts moorings. Maybe something for you to look into if that is the role you have ?