Life on the down slope

We all have half a day with the undertakers - it's a good thing especially if yours is a number of years away or you are just worn out and tired of your life adventure.

As you get older you start to notice aspects of life that are the precursors to the tipping point where you accept you are getting too old to do certain things that are central to your life. I'm not talking about the odd grey pubic hair or maybe even retirement form a career that can be the springboard for another life... maybe sometimes with increasing challenges you are happy to accept. No this step change is something that triggers an awareness and acceptance you are on life's down slope.

Such a trigger happened to me last week. My reason d'entree ( not counting family  - everyone's "reason for being" ) is/has been motorbikes. I've had them every since I could legally ride one, always had one since then and even had motorbikes and sidecars when the kids were little and no one else had such transport ! Of course my journey mirrors life in that there is a pursuance of better and sometimes bigger (not in wife terms of course) and so it was I got my ultimate motorcycle  - the best touring motorcycle I believe to be made YMMV as they say. Not only did I get this machine but I also took it on a personal pilgrimage to the mecca of speed   - the German Autobahns. This as an aside was also part of another life goal to visit Colditz Castle a piece of my childhood enjoyed via the TV series in the 70's as were my action men of the 60's (I've still got the Bulldog !)  As part of the Germans trip we also visited the dams of the Ruhr valley  - another childhood memory and a fantasy I'd ever visit them as was Colditz.

I also took the bike or the previous model ( I had two as that is what I'm like - my wife might say greedy, I might say aspirational) to the North Coast 500 roads in northern Scotland - a mecca for motorcyclists. 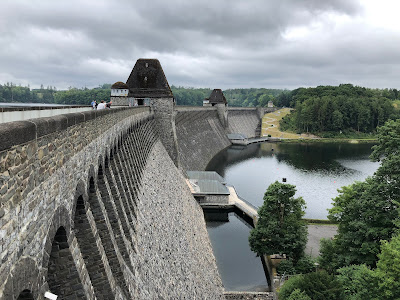 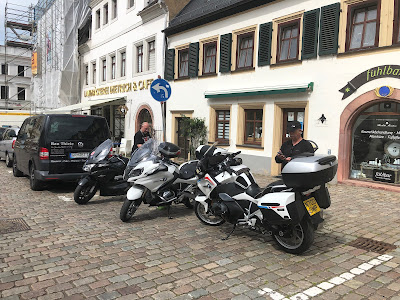 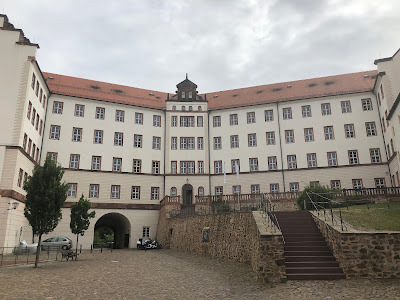 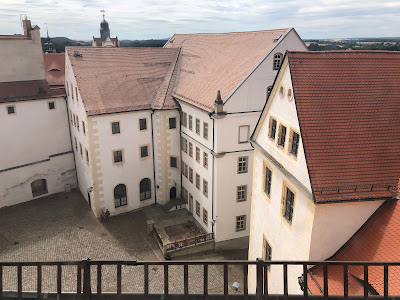 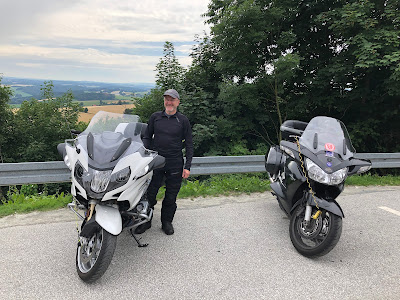 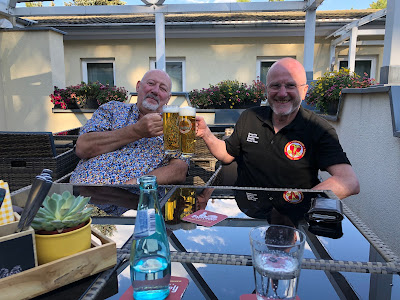 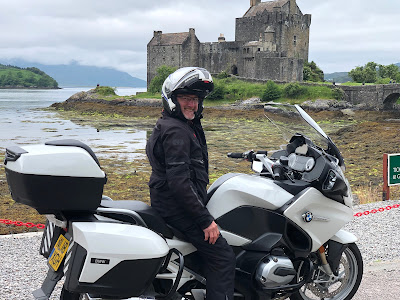 But as you (I ) get older compromises have to be made. That bike weighed in at nearly 290kg, add 20 odd kilos of luggage and a lightweight wife and you are man handling and balancing some weight on old joint. So it's gone the BMW R1250RT . Replaced by what in my youth was a superbike cubic capacity  - a Honda 750. Back to Honda hopefully reliability - something the BMW's didn't have a good reputation for.
So I've gone over the hill in a motorcycling metaphor. Something I'm relaxed at doing but it does come with some reflection, a bit of sadness and lots of excitement.
There is an acceptance, maybe sector age driven or financial or environmental  - or maybe a cocktail of all three that large capacity over technical overweight touring motorcycles have had their day. In that category I've owned two Honda ST1300's  ( V4 turbine smooth power) and two BMW RT's ... so have the T shirt as they say.
Something quite instrumental in my decision making was the purchase and ownership of my 411cc single cylinder Royal Enfield Himalayan. This little ( in cc terms) bike has taken me all over mainland Britain in the last 2 years. Lands End to John O'Groats St Davids to Ness Point. Many small roads, very few motorways the sense of adventure makes me feel like I did when I got my first proper push bike and me and some mates rode to Dovedale and back, one mate fixed a leaking inner tube valve with a chewed fruit salad - hard core adventurers we were !
My new Honda 750 will take those roads and hopefully carry me and Rachel on them so I can show her the wonders of Northern Scotland, or the Outer Hebrides. Maybe the Isle of Man and southern Ireland to think of a few.... the day trips or overnighters on a whim into her beloved Wales will happen - I'll make them happen. We will make memories.
So a bike change that is also a reflection on life moving you in a direction but making that direction work for you and those you love.
When life gives you Lemons ...... sell your touring bike and buy an adventure bike and have adventures ! 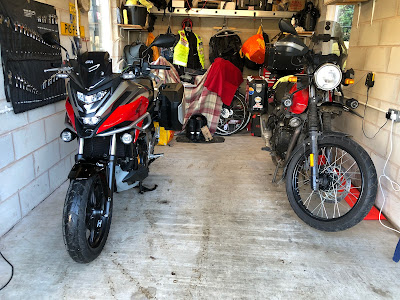 As to boats which is why some or all of you read my minds secretions  - let's see what 2023 delivers, you might be as surprised as I could be  ?
Posted by Nev Wells at 19:42