As blogged about previously we went to Percy to check the boat having not seen her since early December. We did indeed get a warm welcome as the sun was having one of those rare days when it wins out over the clouds.

Percy sits moored east to west or west to east depending where we have come back from. I think we prefer west to east as that points us towards the bottom of the canal .... or Autherly junction where there is about 15 miles of cruising with only one lock to stress the single handed boater.

The orientation of Percy's moorings therefore provides sun on the side of the boat all day. Even weak sun such as we had on Monday was enough to warm Percy inside despite 4c outside.  It made leaving that little bit harder after we had mission accomplished status.

I took my old fishing box and pole set up as a good friend had donated his old gear to me. I also took two sheets of expensive fire board ( 25mm) that I'll use to make a partial hearth for the new back stove.... a lot more on that to come. I played around with the stove pipe I have brought to get an idea of what my challenges will be in fitting. Rachel meanwhile re measured all the curtains and they are now in production at a little shop in Leek.

We finished the day with a pruning of one of the Buddleia's  on the mooring. Maybe a little late as it was starting to leaf up... I did them all in November the year before ....

Here she is ..... patiently waiting for us to take her out. 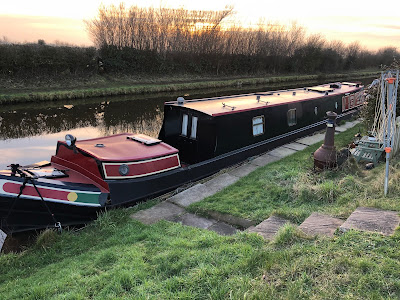