I sometimes miss Fradley as a mooring. We moored three boats at Hunts lock over an 11 year period there. We eventually moved when a mooring came up on the Shroppie, we'd done the routes out of Fradley and the new mooring was a little closer to our new (old) cottage in the Staffordshire Moorlands.

I was watching one of the now many YouTube vloggers "Boating Beyond" * as they were cruising and now moored at Fradley. He took a trip on his folding bike to Alrewas and I was saddened to see C&RT has surfaced the tow path between Fradley Junction and Alrewas. It's a small detail but demonstrated to me the justification for our move as the whole area is being  over used now and this fast cycling path will see exactly that fast cyclists using it as a route. Lots of cyclists used the cafes at Fradley and why wouldn't they now use this new smooth surface to have a road free blast towards Alrewas from Fradley or vice versa. I've nothing against cyclist, I'm one myself but its spoilt what was a lovely rural walk. 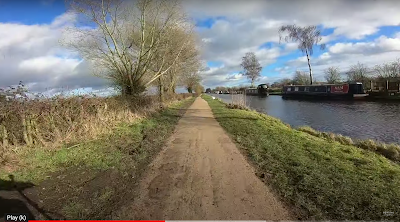 I was recently told there is now also a footpath on the non-tow path side that goes at the back of the Hunts moorings - maybe a walking path from the new marina? All in all a great place to visit by lots of modes of transport but one I'm glad I moored at but also glad I'm not there anymore to experience the move from rural tranquility to commercialised honeypot.

* I wonder how much some of the Youtubers generate from being online and selling their lives to the internet masses via advertising on YouTube. I think some must make a tidy penny especially those who use Patreon.... basically a begging bowl (is that harsh as I guess it does take time to produce this content ?) Then there is the 'merchandising' mugs, T shirts and ever more  'art' in many limited forms. Good luck to them I say, if they can make a living  - some seem to make a good living out of it. But there is only so many composting loo installs, cost of living afloat calculations we can watch before the audience dries up.... there will be ever more click bait appearing, dramatic titles, cleavage shots etc etc. Then we will all move on to the next new thing..... whatever that will be !

Then there is the yesterdays headlines todays fish and chip wrappings  ( you have to be my age to understand that reference) Basically those that thought living afloat was the best thing ever.... and then slowly slip back to land with their windlass between their legs..... Journey with Jono ? I suspect Cruising the cut will follow having made a few quid and run out of ideas.

I'm bitter this morning, maybe it's the weather, or my bad back or envy/jealousy. If you are a fan of any or all of the Vloggers please don't be too offended, after all us bloggers were here first and will be here when the last bit of crap art it drawn or the last composting loo installed.

Hi Nev, perhaps I'm a bit behind the times, but YMMV?

Carol, I didn’t know either until a friend started using it ..... a written abbreviation for your mileage may vary: used, for example on social media and in text messages and emails, to mean that you understand people may have a different opinion or experience than yours: Their first album is better, but of course YMMV

Nev I suspect Google was planning to let Blogger die slowly with their replacement being an all encompassing Google+ which would compete with Farcebook. Well Google+ was a flop so Blogger carries on. Our youngest is in internet marketing and informed me the problem with Blogger is it's insufficiently interactive with post only drawing a small following. Both Google and Farcebook are all about interaction and the collection of personal data. VLogging was never an interest of mine as we had a small mobile data allowance.