I think since we've owned narrowboats including share boats  - checking back on my photos that was 17 years, we've never had such a long break away from cruising. Again with the wonders of digital devices I can see from my blog it was late September when we came back from the Llangollen canal . So over six months of Percy just sitting in the mud.

Last visit late March I sorted the day tank pump as it had leaked air meaning I could not pump up diesel to the day tank. I made a new gasket ( I have the punches and gasket material and judicious use of a ball pein hammer to 'mark' the cuts for the gasket plus a couple of new bolts) saw a new seal achieved and diesel in the day tank. That allowed me to start the donk on Percy which pleasingly fired up with a fast spin first time. The solar panel and the split charge relay having done its job of keeping all batteries on Percy topped up even in the weak winter sun.

Percy might just have faired better than the stop gate under bride 44 at the start of our moorings. 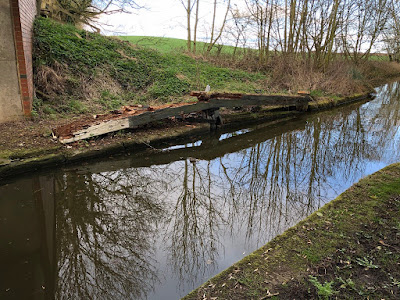 I'd worry it would not swing shut if Shebdon embankment breached - it certainly can't be tested in this state - an email to C&RT I think.

So despite yesterday being the other glorious 12th we were at home gardening and today we are going to Percy but only to finish the engine service and clean and prepare for ...... a trip away later in the week for a little while.

Where are we going - well in time honoured tradition I'd be planning a route to the day to get there and back or around a ring.... but this time I think we are pointing Percy north or maybe south and just going and turning round when we think we need to. We are NOT going onto the Llangollen, next time we do that it'll be late autumn when the hire boats are in bed and only the hardy with stoves in the back cabin or double hardy with lots of thermals on are on the cut.

I suspect we will struggle to get Percy free of the mud, and I also suspect the canals will be summer holiday type busy but thats not an issue ( hopefully don't regret typing that). So next update hopefully should be from Percy somewhere on the Shroppie.

We're doing a few days from Drayton northwards to catch the school holidays and it is (surprisingly) quiet. Llangollen's off the list now anyway.

Enjoy the break and let us know the activity levels on the canal? Expect we will go south and up the S&W for a few days a little Tixell wide ....