Ok, so the Sun won't be asking me to write their front pages any time soon. The following will render  that last sentence understandable.

Some many months ago I was approached by my good boaty neighbour and friend Mandy as she had an issue with her generator. Turns out the choke lever had snapped off making a relatively new generator unusable.

Problem was it had snapped off close to the top of the carb making repairs difficult ( any glue could easily glue the choke solid) and there was little to attach anything to mechanically. In the end sadly she had to buy a replacement. She said she was going to drop it by the bins at Norbury in case anyone wanted it for spares. As my grandad was a bin man and my great grandad something similar I naturally asked if I could have it to see if I could fix it as a 2kw genny at the cottage would be useful - we do get power cuts.

Anyhow it languished in the workshop up until yesterday when I was servicing the Honda genny we use on the boat ( I had removed it as petrol genny's and boat safety inspections should be kept well apart,) and it needed its annual oil change and filter clean. When that was done I turned my attention to the new but broken 2kw Screwfix generator.

I was able to remove the carb quite easily that enabled me to have a good look at the 'fix' challenge. Basically it appears the manufacturer fixes the choke in the carb on the shaft after inserting the shaft - meaning I cannot just replace the shaft. So I pondered the challenge and came up with something Mr Heath and Mr Robinson would have been quite proud of.... be aware there are a few mentions of the word 'shaft', yep I do indeed have that level of schoolboy humour.

Basically I took the multitool sander to the top of the broken shaft and leveled it ready for the drill.

Then I carefully drilled a 3mm hold down the centre of the choke operating shaft.

I then carefully selected a perfectly sized small bolt with a couple of nuts that would fit into the hole in the shaft.

Then I pondered for a lot longer - I needed some form of lever to connect to the bolt in the shaft.... 10 minutes later I raided the picture hanging box ( yes I do actually have such a thing) and fabricated a lever out of a brass picture hanging hook.

I then judiciously applied some Gorilla glue to the wet bolt ( you have to wet one surface to make the glue start foaming)  and inserted and waited for the  reaction and kept the glue from sealing the choke on or off.

I left it a few hours, put the carb and all the bits back together and on the third pull she fired into life  - how pleased was I not only gaining a decent cottage generator but more importantly stopping something from going to landfill.

But a picture is worth a thousand words or the 540 I have typed above. 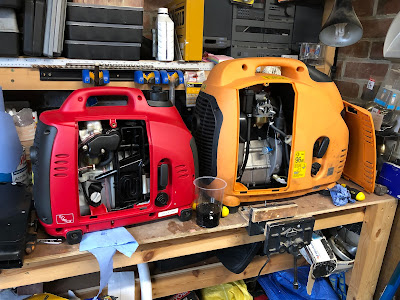 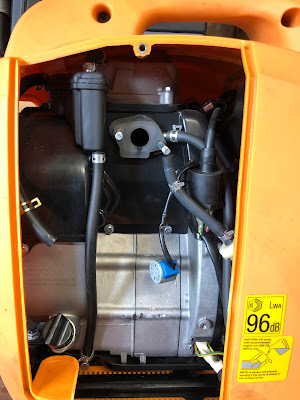 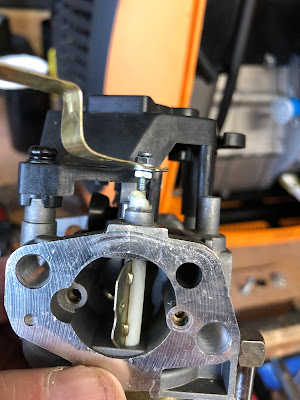 Works a treat ....
So onwards and upwards.... I have fixed the washing machine twice now and the fridge once  ( at home) so feeling so virtuous I'm off out to buy another motorbike !! ( Joke)
Posted by Nev Wells at 07:00