Four more years and a not needed electrical item installed

So today ( Saturday 18th Sept) I was back on Percy at Great Haywood marina for the four yearly boat safety exam. I asked the same person who did it for me at Fradley October 2017 to undertake the work  - just after I had retired, an unrelated point other than to note I left a gap between my old certificate expiring November 2016 to October 2017 naughty !

Percy passed with a compliment on my electrical installation which was nice. Same advisory on low level ventilation. Percy is thirty now so not an issue I worry about.

After the examiner (and his partner) had departed I made the £170 payment ...!! Then I set to on an unnecessary  electrical install that I may never use but will be an bonus to who ever owns Percy down the line. I put in a galvanic isolator, as we don't 'hook up' or moor in a marina ( very often) it's fairly redundant unless things change mooring wise.

So that's one thing less on the to do list for Percy. Plenty more but I'll be a lot more relaxed when I get confirmation from the hull surveyor and then a positive from his insurance survey. It's nice owning an older boat but they do come with responsibilities. 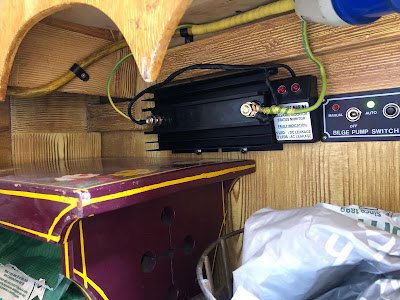